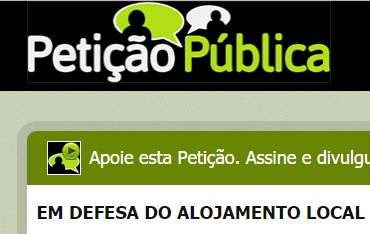 Anybody involved in renting properties to tourists should sign an petition objecting to proposed changes here. Various proposals are being considered at the moment, principally in reaction to soaring property prices in central Lisbon and Porto, where locals residents are objecting to being pushed out of the market. It is possible that any of the more extreme changes – 90 days per year limitations, AL quotas etc could impact on the operation of holiday rentals in Madeira. More likely, according to the people I talk to, will be a change to the tax structure – on two fronts; personal income tax on rental income, and changes to IMI, the Portuguese “Council Tax”.

In order to sign the online petition you are asked either a Bilhete de Identidade (Identity Card) or a Cartão de Cidadão number, but a UK passport number is accepted.

A link to the full text of the petition is below.

A(readable!) PDF of the petition can be found here:

I see the petition has raised nearly 7,000 signatures.

I hear that AL Licences are being handed out with "conditions" in order to clear the backlog here in Funchal. This will be a list of items that need completing after an inspection. The inspectors do not say that they will return to see if these have been done, but if they do and the work has not been completed then it can be a €3000 fine.

You have to wait months in Garajau for an appointment for an AL Inspector to attend a new application.

An article in Portugal News relating to AL channges:-

The Portuguese National Parliament seems to have drawn back from the idea of giving condominiums and neighbours the power to determine whether a private individual's accommodation can have AL:  https://www.dn.pt/portugal/interior/parlamento-vai-impedir-vizinhos-de-vetar-alojamento-local-9027965.html

More on the ongoing debate on the RTP website - specifically on the PS proposal allowing Condomiums to decide whether accommodation within that apartment block can be  rented to tourists:

I received an e-mail this morning referring to a conference to be held on the subject in Lisbon in March  https://www.debatesediscursos.pt/alojamentolocalearrendamento

Surely nobody is going to invest in an apartment to rent to tourists with this hanging in the balance.

03/02/18: from the Diario website today, an interview with Paulo Neves, the deputy of the PSD in the Assembly of the Republic:

The deputy of the PSD in the Assembly of the Republic, Paulo Neves, today warned of the importance that the Local Housing units assume in the regional economy, noting that the parties of the left defend measures that will put in question the subsistence of the small and medium companies that invested in this field.

In Madeira there was a 78% increase in local accommodation in 2016 compared to the previous year. There are currently 9,000 beds, and the importance of this business model for the economy, tourism and even for urban rehabilitation is notorious, said Paulo Neves, supporting his words with the previously degraded and abandoned buildings in the center of Funchal. were rehabilitated by private individuals who bet on the Local Accommodation.

"There are some proposals that have no common sense," noted Paulo Neves, noting that the BE advocates that Local Accommodation should only work for three months a year. Already the proposal of the PS, "curiously" defended by the Socialist deputy of Madeira in the Assembly of the Republic, speaks of "bizarre things", like the approval of all condominium owners in order to open a Local Accommodation unit.

For Paulo Neves, the measures defended by the parties that support the Central Government are a mistake. "They are measures to hinder and to harm those who have invested their money in the Local Accommodation and who are doing a very important work in the areas of tourism, job creation and urban rehabilitation", stressed the PSD deputy, exemplifying with the three units of Local Accommodation that were born in Largo do Chafariz, in Funchal.

Paulo Neves also criticized the fiscal policy that has been applied to these entrepreneurs. "The Central Government of the PS, with the extreme left, have overwhelmed the people who have investment in the Local Accommodation in an unacceptable and harmful way."

That is why it guarantees that the PSD / Madeira deputies in the Assembly of the Republic will defend all those who have invested in this sector, because in Madeira the distribution of these units is "well made": Funchal represents 42% of Local Accommodation, followed by Calheta with 23%, and Santa Cruz with 13%.

I understand that this means that if  more than half of the permilagem of the condominium owners are able to give a reasoned decision, arising from repeated and proven practice of acts that disturb the normal use of the building as well as acts that cause discomfort to the rest of the owners, they may oppose the local accommodation licence for that property.

Another significant addition is the obligation of the Information Book to be made available in Portuguese and English and in at least two other foreign languages. The book should contain information on the operation of the establishment, namely on the Condominium Regulation with the practices and rules of the condominium that are relevant to the accommodation and use of the common parts, rules on the collection and selection of urban waste and the care to be taken to avoid disturbances that cause discomfort and affect the tranquillity and rest of the neighbourhood It should also describe how the appliances work.  The absence of the Information Book is subject to a fine.  The condominium may also impose an extra 30% change on that property for the additional wear and tear to the common parts.

The owner of the accommodation is jointly and severally liable for damages caused by the guests in the building, is obliged to subscribe to a multi-insurance liability insurance and must make available to the Condominium his telephone contact.

Further information can be found here