… as Greta Thunberg visits next week 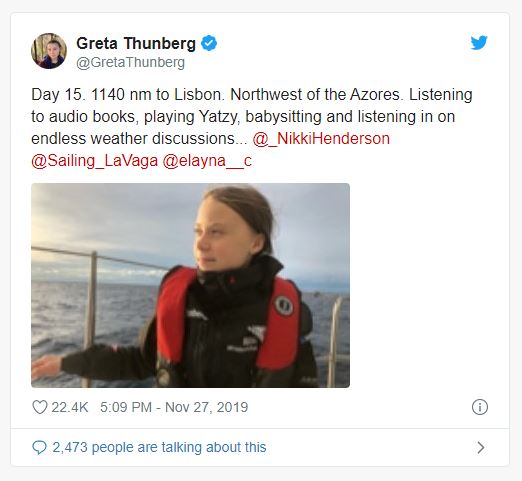 The student climate strike, which will take place on Friday in Portugal for the fourth time, will be aimed at mobilizing young people to participate in the 2019 United Nations Conference on Climate Change (COP25).

On the one hand, the strike was announced “on time,” according to the organization, but on the other, the young Swedish activist Greta Thunberg is due to visit Portugal next week. The young Swedish herself, through the social networks Twitter and Instagram, announced yesterday that she is already in Portuguese territorial waters, off the Azores. Greta Thunberg is travelling aboard a catamaran sailing northwest of the Azores archipelago, 1140 nautical miles from Lisbon.

The expectation of the number of participants in the climate strike that is taking place on Friday is not very high, because fewer cities will join, but the organization considers that, at this moment, the most important thing is not to count people.

“The strike was announced just in time, but we expect a lot of people to be there. However, the main thing now is not the number of people present, but being able to mobilize as many people as possible for COP25″, which starts next week, told Lusa Alice Gato, one of the young women involved in organizing the Global Climate Strike in Portugal.

Nothing specifically to do with Madeira again, but then climate change affects all of us…..