Local newspaper is one of the first to test the service 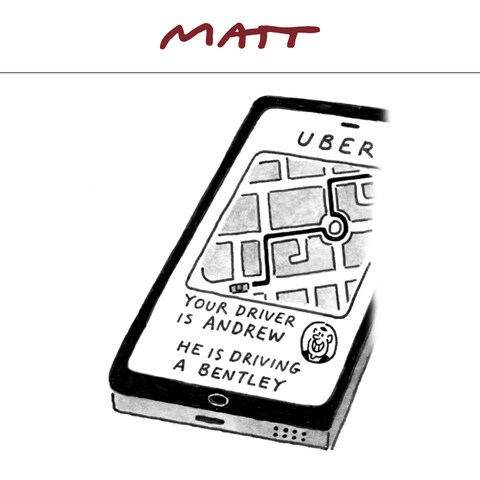 The Diario reports that it tried the new Uber service in Madeira for the first time yesterday. Between 1:00 pm and 2:00 pm, they made two trips, one in each direction, between Piornais and Praça do Mar. In both cases, they were the very first trips for the two drivers, both Luso-Venezuelan and both with new vehicles rented to the operator, arriving yesterday morning in Porto do Caniçal.

In the Piornais-Praça do Mar direction the amount charged was € 5.73. In the opposite way, the price it was € 7.74. The distance covered was about 5 km each way, and in both cases, the trip took about 10 minutes.

The cartoon is from Matt in the Telegraph, brilliant as usual!

Uber available in Madeira from yesterday

Website “NewInTown” reports that in a communique from Uber’s Communication Director in Portugal, Mariana Ascenção, said yesterday “people have been trying to use the Uber app for a long time to arrange transport in Madeira. As of today, they are delighted to make Uber available to Madeirans and visitors to the region”.

“The expansion to the Madeira archipelago strengthens Uber’s operation nationwide, also bringing with it more economic opportunities for the thousands of drivers travelling with the application in Portuguese cities and regions. Uber already covers over 65% of the Portuguese population. The largest service coverage in southern Europe”.

Currently Uber serves users in the Lisbon and Porto Metropolitan Areas, as well as in the Algarve Region, Braga, Guimarães, Coimbra, Aveiro and now Madeira Island. Since Uber’s arrival in Portugal, the app has been downloaded approximately 2.5 million times.

However, the company’s entry into the Madeiran market has caused a bit of a stir and an unwelcome surprise among the islands taxi drivers.  So much so that Rui Barreto, the regional secretary for the economy has said that he will defend the taxi industry as much as possible.  He’s already said that he will guarantee ‘compensatory measures’ to mitigate the effects of Uber’s entrance on the public transport playing field, and concluded by saying that ‘this type of service could be prevented from operating on the island.’