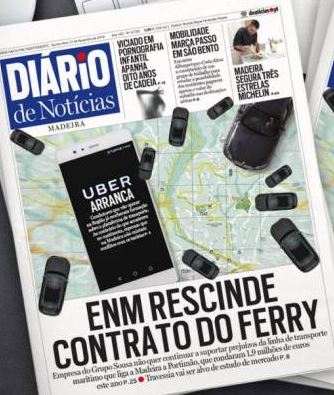 The Diario leads with the story that the Madeiran Shipping Company (ENM) wants to terminate the ferry contract for the link to the mainland that runs from Madeira during the summer months.

The headline theme in the DIARY this Thursday explains that the company owned by the Sousa Group does not want to continue to bear losses from the maritime transport line linking Madeira and Portimão, which stood at around 1.9 million this year. The crossing will be the subject of market study.

More details here when they emerge, which they did on JM’s website:

The Vice President of the Regional Government confirms today that ENM (Sousa Group Company) terminated the next contract two months ago.

The letter of termination was sent by the Maritime Shipping Company to the Regional Government on September 20, two days before the regional elections, DN reports today.

The same news explains the content of the letter sent about two months ago but whose content was still unknown. The Madeiran operator claims that it cannot continue to bear the operating losses and suspends at the end of the second three-year contract.

The letter was sent directly to Vice President Pedro Calado, who explains to DN today that he learned of it on September 24, the Tuesday following the elections. Calado also points out that the possibility of contract termination is provided for in the agreement.

Despite the clarifications released today, the truth is that they did not arrive in the parliamentary debate in the government program, when the executive already knew the contents of the letter and did not inform the deputies, stating that there was only one question from the operator to question whether the year-round ferry proposal accepted by the Prime Minister was maintained.

At this time, this explanation also seems to convince the Regional Government. The vice president understands that, with the promise of ferry all year round, the Sousa Group has given up on a loss-making operation. The same is true of the Regional Government, which is now awaiting the fulfilment of the António Costa Government’s promise.