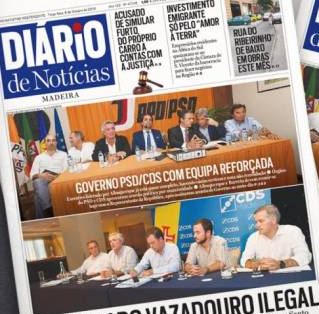 The cover of today’s Diario is composed of two photographs illustrating the meetings held by PSD-Madeira and CDS-Madeira, yesterday, with their respective bodies (Regional Council and Political Commission), which ended with the approval by unanimous agreement on the political agreement that will lead to the formation of the coalition government : “PSD / CDS government with reinforced team” .

The executive team led by Albuquerque is almost complete. Albuquerque and Barreto, the respective leaders of the parties should meet today with the Representative of the Republic, after signing a government agreement at noon.