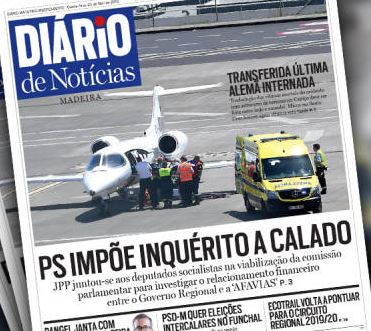 Financial investigation: The headlines in the Diario today focuses on the Socialist Party of Madeira, which has called for an investigation into Pedro Calado, Vice President of the Regional Government. Calado represented the government during most of the events surrounding the recent tragic bus crash, when President Miguel Albuquerque was absent.
The Socialists have joined with the JPP to enable a parliamentary committee to investigate the financial relationship between the Madeiran executive and the AFAVIAS Group, which coincidentally featured in a post yesterday promoting their new Savoy brand.

The front page also features a photograph of the last German wounded in the tragedy of the bus crash in Caniço, who was yesterday transported home. The transfer of the bodies of the victims of the accident will be done today and tomorrow. A Mass in Santa Cruz honours the victims this afternoon and will be presided over by Mr. Nuno Brás, the new Bishop of Funchal.

The Regional Health Service reported yesterday that the two victims of Portuguese nationality remain hospitalised, but are stable. The bus driver was discharged later this afternoon.

1 thought on “Calls for Vice President to be investigated”