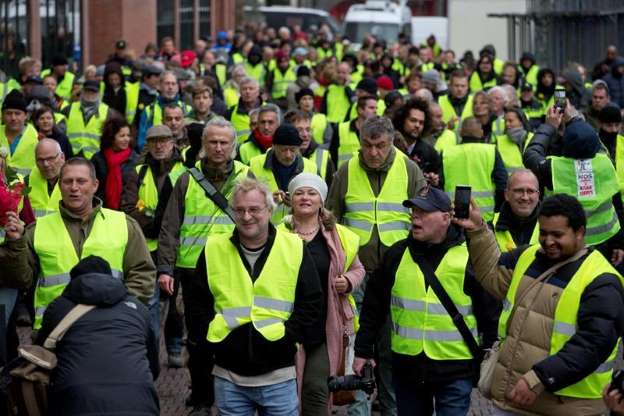 The Diario is reporting that Funchal is listed as one of 17 locations across Portugal where what are described as “Yellow Vest Type” protests will be held today
In a press release, the Public Security Police (PSP) announced that, due to various protest actions of the “yellow vests” movement scheduled for today (December 21), there may be some road traffic restrictions. In Madeira the critical point is thought to be the Rotunda do Infante, in Funchal. Later information indicated that movement in the region had summons protesters to concentrate at Largo do Colégio, at 3.00pm. One of the destininations of the march that will follow will be the Legislative Assembly of Madeira.
“PSP shall, within the framework of its legal powers and competences, carry out all necessary actions to guarantee public safety, order and tranquility, as well as the rights, freedoms and guarantees of citizens, in particular by establishing a balance between the exercise of the right of demonstration and the right to free movement, in particular to road traffic”, reads the press release.

Various protest actions throughout the country are being convened by social networks in a movement called ‘Vamos Parar Portugal’ and inspired by the recent protest actions in France. The list of demonstrations of the “yellow vests” identified by the PSP for this Friday includes 25 protests in 17 locations of the main cities of the country. The Vamos Parar Portugal (Let’s Stop Portugal) rallies are reportedly being planned to demand tax cuts, wage increases, reductions in the price of fuel, and improved public health services

The Portugal News reports that 20,000 PSP police officers will be dispatched for today’s protest in Lisbon, where a large-scale protest is due to take place along the A8 motorway.
The same website reports that a Facebook event calling for a yellow vest protest in Portugal has been removed following a request by police. Organisers claim the event was taken down by Facebook at the request of Portuguese authorities. More than 40,000 people have expressed their intention to participate in the event today, while 14,000 said they would be going.

The Journal reports that drones have been banned in 6km exclusion zones around Lisbon, Porto and Faro airports for today only. This is due to rumours that the “yellow vests” movement has urged some of the protesters to put drones to circulate on Friday at Lisbon airport to disrupt air traffic.

3 thoughts on “Yellow Vests to demonstrate in Funchal.”