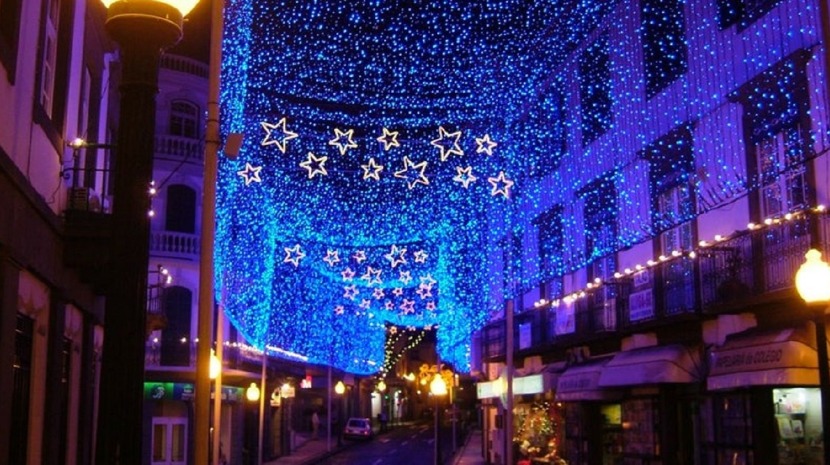 Christmas lights: Both the Journal and the Diario report today that the Christmas lights in the city of Funchal this year have in total more than three million individual bulbs. The Madeira Tourism Secretariat has also announced  that they have designed the project to allow a “religious and Christmas journey”, with a “Script of Lights” dividing the downtown area of ​​Funchal into different areas, with different motifs identifying each area.
In the more traditional streets of the city, such as Fernão Ornelas, Largo do Phelps and Rua do Carmo, the decoration was inspired by the “white gold era”. “The decorative paintings for this area present illuminations with a predominance of bright white that decomposes in small lights, in an evocation of the sugar grains, which are a lasting image of the History of Madeira,” says the publicity attributed to Paula Cabaço, in charge of the Madeira Tourism Secretariat .
The streets around the Cathedral, the Rua da Sé and Rua do Aljube are illuminated with religious religious motives. At the entrance to the Cathedral there are three angels, three and a half meters high, each with an original and innovative design. The Angels play musical instruments and have daily animations (light and sound shows) at 18: 00, 19: 00, 20:00 and 21:00.
The city’s wharf has motifs alluding to travel, as it is the starting point of the island and in this year’s celebration of the 600th anniversary of the discovery of Madeira.
The Christmas pines are a tradition of the largest Madeiran city and this year are five. The pine tree in the People’s Square, next to the city’s pier, is 30 metres high, while the other four allude to Brazil, the United Kingdom, South Africa and Venezuela.