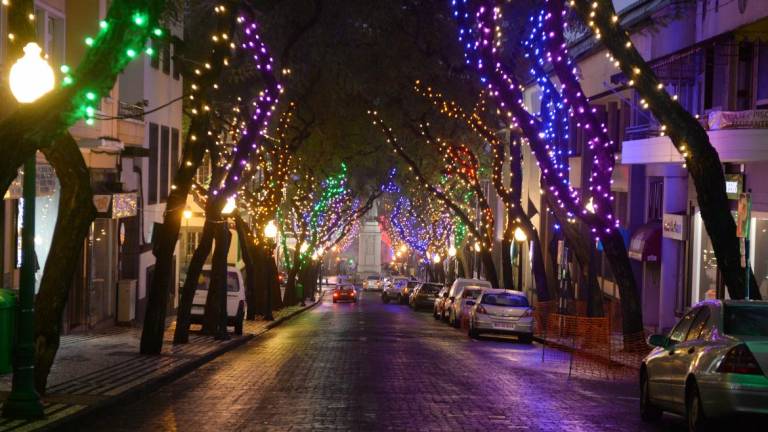 In what is unusually lengthy and detailed article on the Diario website last night, the newspaper reports that the new Christmas lights promised for Funchal, particularly in the streets of Dr. Fernão Ornelas, Aljube and Câmara Pestana, and in the areas around the Sé, the central seafront, and Largo do Chafariz, have been delayed. The new designs were planned to be a change from the last four years and were to include motifs relating to the holiday season, the culture and history of Madeira, as well as references to the fast-approaching 600-year anniversary of the discovery of the islands. However, the long awaited installation has not even started, less than a month and a half from Christmas.
The reason behind this is that the Regional Government ended up holding two public tenders for the contract for the Christmas lights, the first receiving no response, and the second receiving bids from two companies. One of these was awarded the contract, which the other challenged in the courts, and litigation ensued. The process then fell into judicial confusion.

Yesterday evening the Regional Secretary for Tourism and Culture said in a press statement: “Everything was done to anticipate the conclusion of the contract for the lighting of Christmas and New Year in the Region and obtain the respective permission from the Court of Auditors, anticipating the outcome of the public tender …. in view of the fact that (neither of) the tenders submitted were admissible, they were both excluded and the tender was thus abandoned.” As a result, SRTC was confronted with the need for “strict compliance with the law to comply with the direct adjustment procedure”, inviting proposals from the same entities that had submitted tenders in the public tender. Once the direct adjustment was completed, the SRTC “immediately took the award to the best-ranked bidder, promoting the conclusion of the respective contract and submitting it promptly to the Court of Auditors”.

The inauguration of the Christmas lights is normally on December 1st – a source close to the Secretary of Tourism ensured the Journal that every effort was being made to maintain the usual schedule. And he is confident in timely resolution of a problem that is similar to what happened last year.