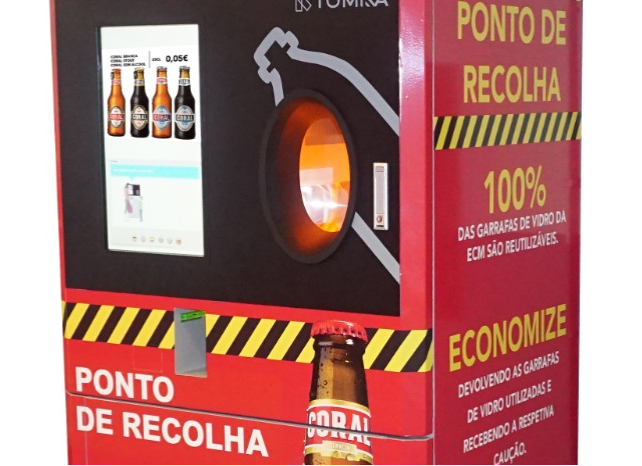 The Madeira Beer Company (ECM) has invested in two glass bottle collectors, which will be placed in two supermarkets – the Continent in São Martinho  and Pingo Doce in Anadia Shopping. In a statement reported in the Journal, the company says “It is ECM’s priority to develop measures that minimise resource consumption and waste production, and consequently environmental impacts,” adding that by depositing the empty glass bottles in these machines, “the consumer is saving”, as they recover the deposit paid (€.05) on the bottles at the time of purchase –  they receive a discount voucher to use in the supermarket.
This system allows the processing of two to three bottles per second without breaking them and has storage capacity per soft bottle of 400 bottles, with a very low energy consumption. Due to the ability to recognise bottles through their weight and silhouette, the system only accepts the return of ECM products, namely the brands Coral, Zarco, Atlantida, Brisa, tonic water and soda water. The machines are equipped with a screen which has an explanatory video in several languages.
The press release says that in 2017, ECM was able to collect 3 million bottles in supermarkets. “This effort and commitment to sustainability translated into at least 240 tonnes of carbon dioxide emitted into the environment”.

The app, which was launched a little while back, is proving very popular, but for those who missed it, it is repeated here, with a link in the sidebar to the app itself.

The app can be added to your tablet or smartphone home screen for immediate access, and pages load more quickly than viewed in a traditional browser. In addition there is also the “Accelerated Mobile Pages” version of the website that has been available for a year or so, which cuts down on the overheads for mobile devices and makes viewing even more speedy. Full details here.