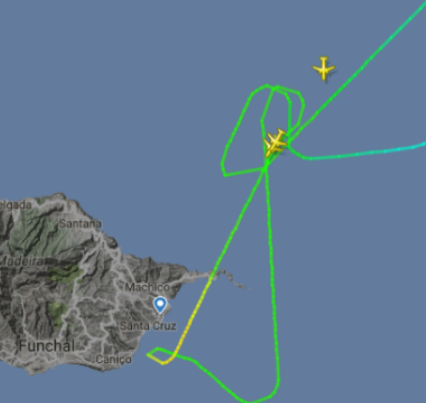 As I am still on the island due to the Russian visa arriving three days after the flight left, I thought I would update the weather situation.
The weather forecast for this week given on a previous post has proved remarkably accurate, with what might generally be described as bad weather throughout, depending on exactly where you have been on this island of micro-climates. However today (Thursday) has taken a turn for the worse after a sunny start to the day turned to heavy rain late morning. This afternoon has seen some torrential downpours and the airport has been badly affected, with incoming flights circling, hoping for a “window” that would allow them to land with better visibility. Effectively little has happened since midday, with Thursday being largely German flights that are now elsewhere (one in Porto Santo, three in the Canaries) waiting for the weather to improve. Flightradar24 currently (16.00) shows three other incoming flights in a holding pattern (later: these returned to Lisbon and Tenerife).

The Diario online has just reported this afternoon that Madeira is under yellow warning due to heavy precipitation which is expected to occur on the island’s northern coast and in mountainous areas. According to the Portuguese Institute of the Sea and the Atmosphere (IPMA), the notice is valid until midnight on December 1st.
A orange warning was also issued early this afternoon for Santana where rainfall had already reached a level of 46.9 litres per square meter in the 6 hours from 8 am to 2 pm. In Santo da Serra it hit yellow (34.9). Won’t be a lot of golf being played up there today. That’s a lot of rain in a square metre, but hopefully it won’t run off too quickly with the ground being dry for most of the summer.
19.00: TAP have been cancelling Lisbon flights later today – they seem very quick to act nowadays – and all their flights to Lisbon (and easyJet’s) were full full today. Steady, heavy, rain continues in the east of the island. Latest weather forecast from IPMA looks like this (the airport forecast is near identical):

The Journal reports that three of the seven flights that diverted yesterday from Madeira Airport eventually landed in Porto Santo. In total, 343 passengers were accommodated in hotel units there. Heavy rain continued in parts of the island overnight, and poor visibility in the area of ​​Madeira Airport continues this morning. In addition to the diverted flights to other airports, two TAP flights from Lisbon did not even attempt the journey. However, this morning, despite the similar conditions, flights seem to be doing better, with 5 arriving and 3 departing by by 9.00am

The IPMA forecast, which has proved remarkably accurate over the last week or so, has not changed significantly this morning – it still shows no improvement at all until Sunday. The yellow warning remains in place until midnight tonight.

Last night saw an Air-Force helicopter pick up a 92 year-old passenger from the cruise ship “Ventura” 14o miles northeast of Porto Santo. He was brought to the Dr. Nélio Mendonça Hospital in Funchal.

More rain overnight and this morning at the airport. Visibility is better, however, and little wind, so flights are operating without any problems. Looking at the webcams this morning (see tab above) it seems pretty cloudy all round the island, with the north coast perhaps a little better than the south.