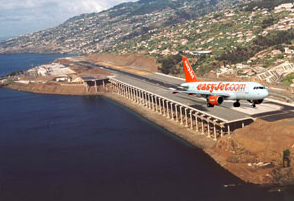 Various sources report over the last few days that easyJet has agreed to buy part of bankrupt carrier Air Berlin’s operations at the German capital’s Tegel Airport for €40m. Air Berlin currently operates three weekly flights to Funchal for as little as €200 return fare from the German capital.
easyJet will enter into leases for up to 25 A320 aircraft and “take over slots”. It is not clear at the moment whether these slots will include the Madeira flights, although these are still being actively marketed through to next April. easyJet has said it would operate a reduced timetable at Tegel during the European winter but planned to operate a full schedule from summer 2018. The carrier said it would announce new routes and services to and from Tegel in due course.The company also said it was hoping to recruit around 1,000 Air Berlin pilots and cabin crew over the coming months, to be employed on German contracts. easyJet already has an existing base at Berlin Schoenefeld in the German capital.
Air Berlin, Germany’s second-ranked airline employing some 8,000 people, triggered bankruptcy proceedings in August after its biggest shareholder Etihad Airways pulled the plug on a cash lifeline following years of losses. Air Berlin was able to keep flying until now thanks to a €150m bridging loan from the German government, giving it time to negotiate the sale of its assets. According to the Telegraph, German and international investors and competitors lined up, with an eye not only on Air Berlin’s aircraft but also coveted take-off and landing slots at crowded airports.