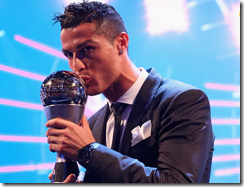 Madeira’s Cristiano Ronaldo was, as expected, crowned the best soccer player in the world for the second year running at Fifa’s The Best awards gala last night in London. The four-time Ballon d’Or winner won a La Liga and Champions League double with Real Madrid this year, striking twice against Juventus in the European Cup final to help Real become the first team to retain the trophy in its current format.
Barcelona’s Argentina forward Lionel Messi and Paris St Germain’s Brazil forward Neymar were runners up for the award voted for by a collection of journalists, national team coaches, national team captains and the general public – each with a 25 per cent weighting towards the overall vote.
The Fifa World Player of the Year award was merged in a partnership with France Football’s Ballon d’Or in 2010 to become the Fifa Ballon d’Or for the next six years. Fifa agreed to pay £13million to merge the two awards, with Lionel Messi and Cristiano Ronaldo the big winners as the two La Liga stars dominated throughout the six-year deal. Fifa decided not to renew the deal in 2016, meaning the Ballon d’Or lost its ‘Fifa’ tag and reverted back to being voted for by journalists as a separate award as Fifa’s The Best awards were created.
The Ballon d’Or winner will be announced towards the end of the year.

Had this e-mail in from Jet2 last night, offering 10% discounts next month. Looks like the market is stabilising after the price rises in the aftermath of the demise of Monarch. Prices have been high recently but coming down again in the last few days. New routes have been announced by other carriers:

Eurowings, the low-cost arm of troubled German airline Lufthansa, have announced three flights to Madeira from Vienna, commencing January next year. Prices are from €99.99. They will also increase their connections from Berlin-Tegel to ten per week, with fares from €79.99. This appears to be in the wake of the disappearance of Air Berlin.

Thomas Cook have announced that from Spring 2018 they will start a new route from Manchester to Funchal twice a week on Mondays and Thursdays. Flights start from £62.99 in May, rise through summer, before falling to £47.99 in October.