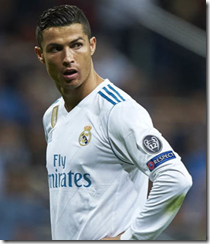 The Sun reports that Cristiano Ronaldo’s sister has appeared to confirm the football star has paid the medical bills of people injured in the recent devastating Portuguese wildfires. Pop star Katia Aveiro posted a link to a report about the Real Madrid’s forward’s generosity on her Facebook page.
It proclaims: “Cristiano Ronaldo paid for the medical treatment of the 370 people injured in the Portuguese wildfires.” Katia, one of the former Manchester United player’s three siblings, applauded the move and adds: “This is a good way to react.”
The Mirror reports on “Real Madrid forward’s staggering act of generosity towards fire victims”
Ronaldo took to Facebook after last weekend’s wildfires which claimed the lives of 42 people to say: “It’s impossible to remain indifferent to this tragedy. Solidarity with the relatives and friends of the victims”.“Full support for firefighters who risk their lives to help in the best way possible.”

Whilst it is easy to criticise some of the new builds – particularly the monstrous Savoy Palace – it is good to see some more tasteful developments being undertaken. Artists impressions are emerging of the new “Savoy Residence” alongside the Savoy Gardens in the Casa Branca area above the lido, showing a sympathetic low-rise construction. The above is from Skyscraper City – on the same page you will find some good photos of the work preparing the site for the new Pestana in Câmara de Lobos.
It is not clear if the name of the new development indicates a connection with the Savoy Palace – the company behind it appears to have acquired the name, as their first hotel, the Saccharum in Calheta, was recently renamed with the Savoy prefix. It would make sense, as the site is where all of the plants and trees from the gardens of the old “Classic Savoy” were taken prior to its demolition.

The Diario yesterday reported on the centrist CDS-PP party leader, Assunção Cristas, recalling that the executive of António Costa promised €17 million for the reconstruction of the island, particularly of the municipal area of Funchal, after the fires of August of 2016 which caused the death of three people. She claims to have seen a report showing that as little as €80,000 has so far been received.

Poor for today – cloudy with showers, particularly in the north of the island.