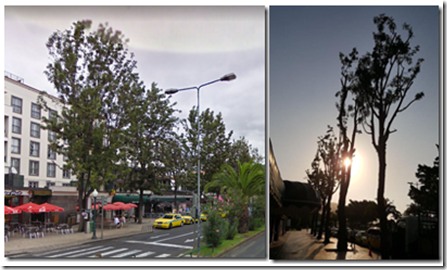 FN online draws attention to recent pruning work undertaken on the tress lining a section of the Avenida do Mar on the seafront in central Funchal – near the taxi rank and a couple of well-known fast-food outlets – “before” and “after” shots above. They quote the former regional director of Agriculture as “incredulous” when he visited Avenida do Mar and observed how the trees (Grevillea robusta) had been pruned
In addition to questioning pruning at this time of year he also questioned the number of branches removed. Experts agree improper pruning can even cause tree death because a poorly cut branch, if not healed, is a gateway to moisture and disease-causing organisms such as fungi, termites and others.
The “Silk Oak”, as it is also known, can reach 30 to 35 meters in height and, as it has a large volume, must be planted on wide sidewalks with plenty of space. Experts question whether any pruning is necessary at all. 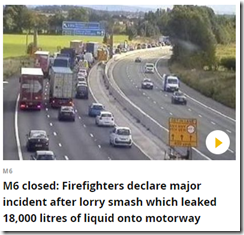 A number of passengers due to leave Manchester airport on Friday afternoon missed their flights when the M6 was closed after two lorries collided at 1.00pm yesterday, resulting in 18,000 litres of liquid spilling onto the motorway near Knutsford. Cheshire police report serious gridlock throughout the surrounding areas, and motorists near the actual collision were evacuated for their own safety as one of the HGVs began leaking.