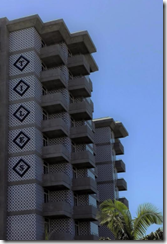 Most visitors to Funchal will not have missed the extensive work that has been undertaken over the past months on what could arguably be described as one of Funchal’s ugliest hotels in the centre of the Lido district.
Now refurbished as a “modern four star hotel” after an investment of around €6 million, the new Tiles Madeira Hotel was inaugurated yesterday . The former ‘Gorgulho’ continues to have the distinctive tiles which have been incorporated into the brand image.
The total remodelling of the building, which now includes a rooftop bar “with a sweeping view”, has created another 10 jobs in addition to the 20 already existing. A restaurant ‘Madeirense’, is planned for later this year. The hotel has 124 rooms, although strangely, its website is not complete.
As is to be expected with elections looming, a lot of local politicians made an appearance at the opening ceremony including former President of the Regional Government of Madeira Alberto João Jardim.

The column of smoke that could clearly be seen from the higher parts of Funchal yesterday afternoon indicates that the fire at Boca da Corrida in Jardim da Serra is still not extinguished. The Diario reports that firefighters and equipment remain in attendance.