Air Berlin, Germany’s second-largest carrier, has filed for insolvency, after its main shareholder, Abu Dhabi-based airline Etihad, declared it would not be providing further financial support. According to the BBC the airline has accumulated debt for almost a decade and reported a record loss of €782 million in 2016. Flights will continue to operate after a transitional loan of €150 million from the German government.

Ryanair said: “This manufactured insolvency is clearly being set up to allow Lufthansa to take over a debt-free Air Berlin which will be in breach of all known German and EU competition rules”. “Now even the German government is supporting this Lufthansa-led monopoly with €150 million of state aid so that Lufthansa can acquire Air Berlin and drive domestic air fares in Germany even higher than they already are”. A German economy spokeswoman said: “I reject the accusation by Ryanair today that it was a staged insolvency application”. 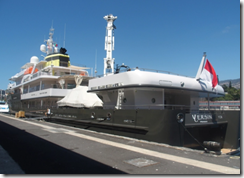 The rather unusual Yersin “yacht” is currently visiting Funchal harbour, with trip planned to the Desertas and the Selvagens islands. The unique vessel, which pairs luxury with research, is the brainchild of French millionaire François Fiat, who happens to be in Madeira at the same time – reportedly staying at Reid’s for a few days.

Fiat has invested millions in the vessel, named after nineteenth-century bacteriologist and physician Alexandre Yersin, famous for his work fighting the bubonic plague. Fiat, according to FN, wanted a ship that could be a worthy successor to the famous Calypso of Jacques Costeau. He wanted to create a boat capable of traveling to any part of the globe, prepared to face the most difficult seas and climates, and to be endowed not only with comfort on board, but all technology to conduct scientific research. He also wanted the ship to be as environmentally friendly as possible so as to have the least impact on the sensitive ecosystems it visits – the boat is able to develop scientific research work even within the most restricted natural reserves.

Prince Albert of Monaco, who is a great supporter of this Francois Fiat venture, and who sometimes wrongly credited with ownership of the Yersin will be coming to Madeira in September. Yersin will carry out expeditions to Macaronesia, subsidized by the Principality of Monaco. His great-grandfather did research in the late nineteenth and early twentieth centuries in the waters of Macaronesia, from Cabo Verde in the south to the Azores in the north.