Don’t know what today will see at the airport, but the omens are not good, with TAP telling customers travelling to/from Madeira not to go to any airport unless their flight is confirmed. IPMA, the Portuguese Institute of the Sea and Atmosphere continues to place the southern part of the island under yellow warning due to high temperatures and strong winds, with gusts predicted reach 80 kilometres/hour on the eastern end of the island. As early as last Thursday, ANA warned of adverse weather conditions between Saturday and Tuesday, which could cause problems at Madeira airport.

When more news becomes available I will post it here during the day.
9.30: There are already nine scheduled arrivals cancelled , mostly TAP. This includes a Lisbon flight that is shown on FlightRadar24 as having turned back. A TUI Fly plane from Amsterdam also looks to be heading for Porto Santo. Nine departures are already cancelled for today, mostly smaller operators to continental Europe. None of the major UK Operators have cancelled yet, but Jet2 is already estimating 17.00 departures for its lunchtime flights.
10.30: The airports website appears to be down. FlightRadar24 shows that the Birmingham Monarch flight just landed.
11.00: Airport website still playing up, but it looks like a batch of flights, including the usual early UK ones, landed soon after 10.00 and have continued to do so. An easyJet flight from Gatwick is holding, so not everything is straightforward. Landed now.
16.00: The Diario reports online that the strong winds that have affected flights at Madeira Airport since Friday has caused the cancellation of 101 flights and affected 14,700 passengers according to ANA – Aeroportos de Portugal. Today, there was a interval of calm in the wind conditions between 10 and 12 o’clock as reported above, which made possible 11 landings.
18.00: Looks like some problems may have returned, with some flights encountering difficulties again. A TAP flight from Lisbon is currently coming back for a second attempt. A couple have now landed.
19.00: Just talking to a returning holidaymaker at the airport – more problems apparently, as later flights try to land. So far today 22 flights have landed. 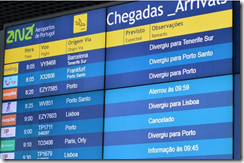 Both the Journal and the Diario report this morning that around 5,500 passengers were affected by the cancellation of dozens of flights over the weekend at Madeira Airport due to the strong wind, according to ANA – Aeroportos de Portugal. A total of 56 flights were cancelled and another two technically described as delayed. Since midnight yesterday, according to the ANA website, 23 landings and 24 take-offs were cancelled and only two flights departed from Funchal airport, both to the mainland very early yesterday morning. During the day, six aircraft were diverted to Porto Santo, five of which still remain on that island. A Monarch flight from Gatwick eventually went to Las Palmas, in the Canaries.

Porto Santo Line will carry out an extra trip today (Monday) according to the company’s website. A statement says that due to the problems with air operations experienced in recent days in the Region and being aware of the significant contribution that the maritime transhipment alternative has been making in reducing the impact of this situation, the operation of Porto Santo Line will be reinforced with an additional trip, at the following times:
– Porto Santo – Funchal: 12h30
– Funchal – Porto Santo: 16h
Passengers who wish to change their tickets, originally booked for Porto Santo – Funchal at 20.00, to the new time of 12.30, can do so, without additional costs (tel: +351 291 210 300).

The Secretary of Tourism has, according to the Diario, suggested a future strategy to minimise the inconvenience of passengers who cannot land at Madeira Airport due to strong winds. The plan would be to operate a transfer between Porto Santo and Caniçal at the eastern end of Madeira, using the Porto Santo ferry. Presumably this would cut the journey time significantly and allow the “Lobo Marinho” to make more journeys between the two islands when planes divert. There would still be a problem with the number of planes that the Porto Santo airport can accommodate on the ground at any one time.

The Madeiran government said today that a “structural solution” to the island’s airport conditions is the responsibility of the airport authority ANA – Aeroportos de Portugal, but considered that in the last days there was an “effective response” to the problems caused by the strong wind that since August 5 have been affecting Madeira Airport

“It will be important to remember that the Regional Government [of Madeira] is responsible for the management of the destination, not the structural solution of the problem. This responsibility belongs to ANA, a source from the Secretariat of Economy, Tourism and Culture told press agency Lusa. The Madeiran executive considered that in this case there was an “effective response” from the hotel units, travel agencies and Porto Santo Line.