Festa dos Compadres to start the Carnival Season for 2017

The Festa dos Compadres, is traditionally the event that opens the carnival season in Madeira. Although officially Carnival celebrations in Funchal will begin this year on February 22nd, it will as usual be the Festa dos Compadres in Santana that will kick off the carnival season on the island, starting on the 16th of February. The dates have been confirmed in today’s Diario, and the full program will be posted here nearer the time us usual. Carnival in Funchal lasts until 1st March this year, with the main parade on 25th and Fun Parade 28th February. The dates are quite a bit later than last year when Festa dos Compadres started on the 28th of January, with events in Funchal starting with the Allegorical Parade on 6th February. 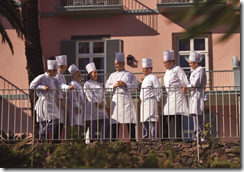 Reporting on the Il Gallo D’oro at the Cliffe Bay winning its second Michelin Star at the end of last year, it was largely overlooked that the restaurant at Reid’s Palace, “William”, was distinguished with a single Michelin Guide star for the first time.
The 2017 edition places this restaurant among 21 Portuguese haut cuisine establishments awarded with the star. The gourmet restaurant is led by the Madeira born chef Luis Pestana and supervised by chef Joachim Koerper,

Today’s Journal reports that the National Statistics Institute have (rather belatedly) released the 2015 data from the Regional Economic Accounts for Agriculture (CEAREG). In the whole of 2015, agricultural production in the Autonomous Region of Madeira was valued at €104.4 million, an increase of 14% on the previous year. It is too easy to say that the island simply depends on tourism, but the contribution of agriculture to the local economy is not to be under-estimated.

20 facts you didn’t know about aircraft

Interesting article on a recent Monarch “blog” (a blog that seems to be running out of momentum, judging by the frequency of the posts) entitled “20 facts you didn’t know about aircraft”. Interesting that with all the technology, including 200 computers on-board each plane, there are still the old superstitions – thus no Row 13. I don’t recall if this is the case with other airlines?

RTP Madeira are reporting that the  “bankrupt” Madeira Regency Palace has been bought by Pestana, who aim to restore it to its 250 room – 5-star standing. More details here when they emerge: http://www.rtp.pt/madeira/sociedade/grupo-pestana-compra-hotel-madeira-regency-palace-_7521