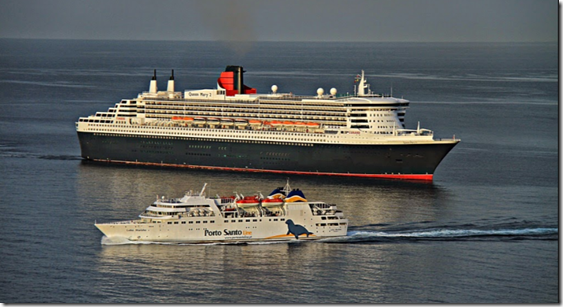 The Porto Santo ferry has its last sailing this morning prior to it’s annual maintenance. The work to the Lobo Marinho will take place in Canical and is expected to last four or five weeks. The photo by João Conceição shows the ferry dwarfed by the Queen Mary 2.

The Diario reports that a corpse was discovered yesterday afternoon at Cabo Girão by the Public Security Police (PSP) of Câmara de Lobos after an abandoned car was found nearby. The Câmara de Lobos Volunteer fire-fighters initially attempted to recover the body, but the operation was later suspended after access proved difficult, and will be resumed this morning. Until then, the facility will be restricted to visitors, who will be able to access the stores, but not the viewpoint. A drone was used to identify the corpse.
Update Thursday: Yesterday afternoon, after a five hour operation, the body was recovered to the viewpoint at Cabo Girão from a point 100 – 150 metres below. The operation was carried out by a mountain rescue team, with a total of 11 firefighters supported by three vehicles. A man has been reported missing, linked to the abandoned car, so it looks very much like a suicide.

The new year has seen the proposed sale of Novo Banco, the “good” part of the rescued BES bank, become a shambles. China’s Minsheng is out of the race, according to Jornal de Negócios yesterday, as it has not been able to show that it has sufficient funds to make the purchase. Minsheng was selected as the preferred bidder by the Bank of Portugal before Christmas but it is now apparent that the national bank blundered in its initial choice and now will have to choose between two other consortiums, one of which looks like being joined by the family with the the largest shareholding in BPI, another Portuguese bank. The winning bid was scheduled to be announced on today but the Jornal de Negócios believes that now anything is possible – including starting the bidding process all over again, for the third time. 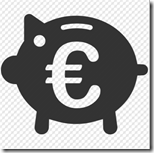 Apologies – only just picked up this story, which is a change to a post in September this year. Portugal’s President has recently vetoed the government decree that would force banks to inform the tax authorities about bank accounts in Portugal with more than €50,000 in them. The now overturned law, approved by Congress, implemented an agreement with the United States concerning automatic exchange of financial information about non-residents, but the government decided to expand these rules to all people resident in Portugal, Portuguese or foreign.
In August, the national data protection commission, when it read the draft law, said there was “unnecessary and excessive restriction of fundamental rights to protect personal data and private life, in a clear violation of the Portuguese Constitution”.

Still on the subject of money, the Metro online edition today reports that bosses at top companies can put their feet up this lunchtime – after earning as much as most of their employees will make all year. Chief executives of FTSE-100 firms are now typically paid £4 million, so need 3½ days to rake in the average salary for their staff of £30,800. Last year it took until late afternoon on January 4 for the top dogs to bank the equivalent of an annual wage.