Best wishes to the ever-increasing number of blog readers as the fireworks display and 2017 approaches. Certainly this year has been eventful, both locally with the devastating fires, and on a global stage. The future of Europe will no doubt remain firmly in the headlights over the coming year. 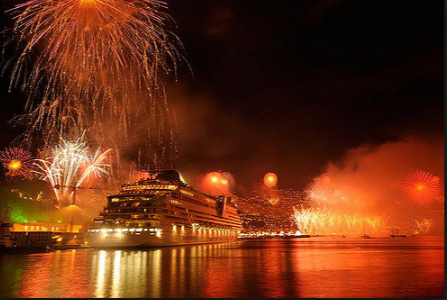 The schedule for the remainder of the festive season is on the previous post, and it has been confirmed that nine cruise ships will attend the firework display on New Year’s Eve, including the Queen Victoria and the Oceana. Interesting details on the comings and going on the MarineTraffic website :

The Portuguese “Met Office” has forecast that between December 31 and January 2 “there will be persistent precipitation, which can sometimes be strong” throughout Madeira. The wind, associated with a cold front, will be moderate to strong predominantly from the southeast, with gusts up to 80 km/h, especially in the highlands. Waves of up to 3 metres will be from a southerly direction. They predict that the maximum temperature at sea level in Funchal will vary between 18 and 21ºC, and the minimum between 14 and 16ºC. Apparently a strong anticyclone located over central Europe is responsible for this rather dismal outlook – and the weather had appeared to be improving recently.

Various sources report on the preparations for the firework display. The company staging the display, Macedos Pirotecnia Lda, has already prepared major firing points at ​​the Tecnopolo and Lazareto, with another taking shape at the “RG3” army base in Sao Martinho. These provide some of the major “backdrop” displays to the main event on the seafront. 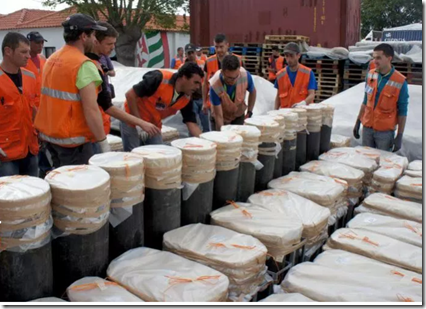 Macedos Pirotecnia say 132,000 pieces will be fired over an eight-minute period from 36 different positions (3 at sea), which sounds a little more concentrated than previous years. They believe that it will be the biggest firework display in Europe – the same company set the island’s world record display ten years ago.

Visually the bay of Funchal is overcast this morning (8.00am) as the pilot boat heads out to meet the Oceana cruise ship. The waves also appear to be stronger than usual,and the sea generally agitated in a fairly strong wind. The Portuguese “Met Office” has revised its forecast to: “Mainly cloudy. Possibility of showers, especially during the afternoon. Low to moderate wind (10 to 30 km/h) south”.
Meanwhile the Journal reports that the nine ships that will be in the port and the Bay of Funchal have made alterations to their arrival times, due to the poor sea conditions forecast. According to data from the Administration of Ports of Madeira (APRAM) a total of more than 20,000 people, including passengers and crew, will be here tonight. Due to the changing condition of the sea, the ships have had to make readjustments in their arrival times, resulting in some tourists being unable to visit Funchal using the small ferries, as normally happens.

21.00 The weather appears to be clearing a little, and the waves subsiding. One cruise liner has made it into the bay and is at anchor – a risky exercise for such a huge vessel when the waves are at 3 metres. If the conditions continue to calm then hopefully more will arrive. Pity for the businesses in Funchal that the earlier arrivals were not all able to disembark.