EU citizenship proposal could guarantee rights in Europe after Brexit 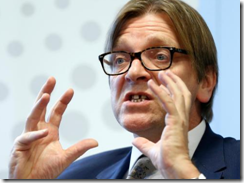 As Brexit takes shape, The Times reports this morning that Britons could pay to retain the benefits of European Union citizenship under plans being considered by MEPs. The European parliament’s lead Brexit negotiator Guy Verhofstadt said he supported the principle of the idea, which would see UK citizens sending an annual fee to Brussels. The former Belgian prime minister said Britons who voted remain did not want to sever their links to the EU. “Many say ‘we don’t want to cut our links’,” he told the Times. “I like the idea that people who are European citizens and saying they want to keep it have the possibility of doing so. As a principle I like it.”
The Times website is only accessible in full by subscription (I think you can get two articles free per week?), but there is more in the Guardian here and The Telegraph here.

The Michelin Guide for Spain and Portugal was published last week and Il Gallo d’Oro found that it has been awarded a second Michelin Star – one of only five such awards in Portugal. The restaurant, situated at the Cliff Bay Hotel on the Estrada Monumental in Funchal, received the award for the first time in 2009 and was the first restaurant on the island of Madeira to receive this distinction.

As reported in a previous post the Golden Gate Cafe was auctioned last week by the Regional Government, in consultation with the bank owning the property. The indicative minimum value of the property was €2 million, but four proposals were submitted in sealed envelopes, with losing bids between €2.5 million and €3,560 million. The highest bid was submitted by the “Sociedade Gold Medal”, which eventually acquired the property for €4.748,000. The proceeds will be shared between the Regional Government and Millennium BCP. “This auction is important, especially for the unique understanding protocol between the Government and a private entity,” said the regional director of Heritage, Hélder Fernandes, underlining that in this way, the Golden Gate Cofe will be returned to Funchal.

The nineteenth century property, also known as “Corner of the World”, closed its doors on August 3rd, 2014 due to the insolvency of the previous owners. Fernandes stressed that “the space must always use the same name” – although I recall from somewhere that the name “Grande Cafe” was also used in association with the building?

Saturday morning saw a British tourist, a 43 year-old woman, fall 100 metres to her death whilst walking the Levada do Norte at Eira do Mourao above Ribeira Brava. Sky News coverage here amid calls for more safety along the more dangerous levada walks. The Mail has a big story here, whilst RTP Madeira’s Facebook page shows video footage of part of the 4-hour recovery operation. Our thoughts go out to her family.