Another favourable review of Reid’s Palace in the Telegraph a few days ago.

The article recalls that the hotel was built by Scotsman William Reid in 1891 and immediately attracted a parade of European royalty and English aristocracy – apparently, to this day, the two tiers of the Dining Room are still referred to as ‘The Lords’ and ‘The Commons’. The travel section of same newspaper also ran a story last month on 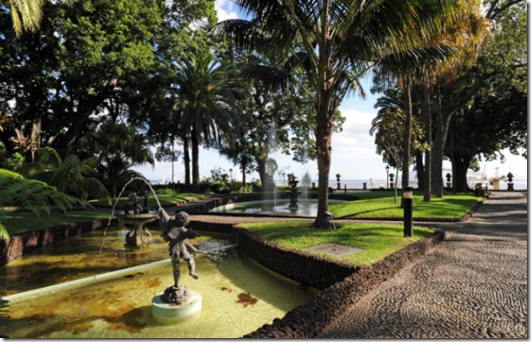 These included Quinta Vigia, which was featured here recently, and Quinta da Boa Vista. The Telegraph reporter had the pleasure of meeting Betty Garton, who is in her nineties but still runs the orchid gardens at Quinta da Boa Vista – as indeed I did when reporting on the gardens in 2012. A remarkable woman!
Interestingly the author of the latter article explains that he was inspired to come to Madeira and learn about these historic properties by a book written in 2004 by Marjorie Hoare – a family friend from Gibraltar, where he grew up – who had been evacuated to Madeira during the Second World War (I think the book is still available on Amazon?). I had no idea that 2,000 Gibraltarians were relocated to Funchal to make way for more military personnel on the Rock.

One of the influential foreign exchange blogs reports how the Euro is being undermined by on-going political concerns ahead of the Italian political reform referendum due in two weeks. In addition the European Commission has warned that eight Eurozone countries are at risk of breaking EU rules because they have budget deficits greater than the permitted 3% margin. With some of the culprits having already had EU fines waived for missing budget targets last year, Euro critics will argue that the EU loses credibility if it agrees rules and then fails to enforce them.
The Wall Street Journal reports that a rejection of Italian Prime Minister Matteo Renzi’s referendum on Dec. 4 could rattle stocks, bonds and the euro—and set a damaging tone for Europe

Cristiano Ronaldo wrote more history yesterday in the Madrid derby, with yet another hat-trick, as Real Madrid won 3-0 away at Atletico Madrid. His goals on 23, 71 and 77 minutes saw him overtake Di Stéfano as the leading scorer in Madrid derbies. Another ball heading back to the display of hat-trick balls in his Funchal museum! He very near scored another last week for Portugal, missing a penalty but still ending up with two goals to his name.
Meanwhile the Diario reports that Benfica qualified for the knock-out stages of the Taça de Portugal after “trouncing” Maritimo 6-0 at the Stadium of Light in Lisbon yesterday. That will not have been a happy plane full of footballers back to Madeira!