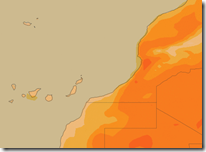 The holiday period must have truly arrived as there is little news recently. The weather here in Madeira seems to be the “hot” topic at the moment, with temperatures in Funchal reaching 37.8 at 16.00 yesterday – the highest recorded for 40 years in August (in 1976 temperatures reached 38.5). The police have decided to cancel all firework launch licenses for a few days as a precaution whilst the warm continental air continues to dominate – a small fire was reported yesterday above Sao Martinho. The orange alert for high temperatures is expected to continue into next week.

Despite the high temperatures the sea has been surprisingly rough with bathers at the newly reopened Lido being surprised when waves arrived in the pool on Thursday, with a photo from the Diario catching the occasion

There were no reported injuries, with a small amount of damage being caused to the bathing complex, which was closed for maintenance yesterday. One has to wonder that if a strong sea swell, possibly combined with a high tide, can do this to the new Lido, then what will a serious winter storm do? Visitors are being redirected to the nearby facilities at Ponto Gorda, with red flags flying at the Lidos and Praia Formosa yesterday. Strong winds also caused a few problems at the airport this last week.

This weekend sees the celebration of the black scabbard fish in downtown Câmara de Lobos. A number of local restaurants are participating, with offerings not strictly limited to espada.. Miguel Albuquerque, President of the Regional Government, attended the opening ceremony yesterday.

The Diario today reports on the strange “diagrams” that are appearing around the city centre, normally found around the small power distribution boxes that are a familiar sight on the street. A number of theories are being advanced on social media, but nobody seems to have an explanation at the moment. Reports say that these have only sprung up recently, but I recall first noticing the earlier in the year. Some are growing overnight with additional sections being added. One wit has accurately observed that they might be the plans for the new hospital in Funchal.