Woken at 5.00 this morning by sirens – a lot of them – so unlikely that there will be any good news today. The wind has not returned, but what there is seems to have changed directions slightly. A pall of smoke still hangs over the bay of Funchal and the smell of burning pervades. People with respiratory problems will be having a tough time, and whilst no tourists have been injured, a lot have been displaced, and they cannot be quite enjoying the holiday they were expecting.
Let’s hope the site holds up a little better today after going into complete meltdown yesterday!

Further to the Comments left on the last post the authenticity of account set up by Câmara Municipal do Funchal to receive donations can be confirmed. Strangely their website has not been updated, but their Facebook page has. 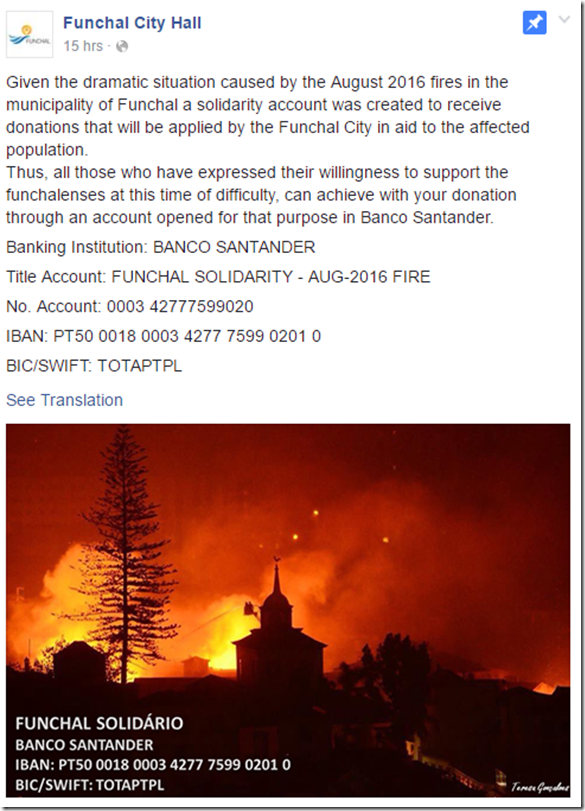 The Diario overnight reports that the fires that started in Calheta have now spread to Prazeres. Flames have approached homes and it is apparently proving very difficult to fight the fire. In social networks there are calls for more resources to be sent to that area and residents speak of “hell” and call for greater numbers of fire-fighters. Photo: Portal da Calheta 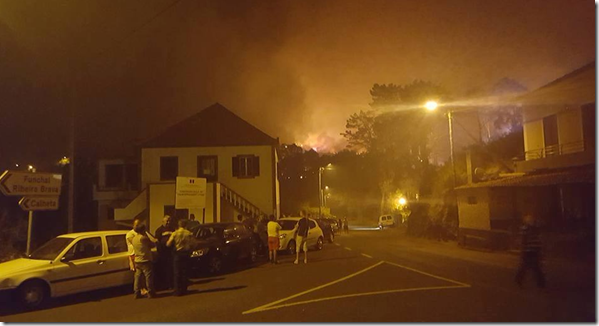 It emerged from the fires of 2012 that were widely covered here, that a lot of fires were set by people “inspired” by the first instance (no report on any sentence for this arsonist yet). No mention of this so far in this outbreak but the spread across the south-western coast must be more than a coincidence? Update: a can of petrol has been discovered by the forest police near the seat of the Paúl da Serra fire.

Madaeira’s most famous son has posted his support on Facebook together with with an image of the Madeiran flag:

It is with a tightness in my heart that I watch what is happening in Madeira (and in other parts of the country). A lot of strength to all, and a thank you to the fire department that has the courage to risk their lives to save many others. I’m with you!”

Following up on the donations story above, Banco Santander Totta will give a donation of half a million euros to support people who have been affected by the fires of the last three days. The news was announced by President of the Regional Government, Miguel Albuquerque, on a visit held today to premises of the Portuguese Red Cross. The president said that part of this amount will be deposited in a Property Institute account to support the reconstruction of buildings and the other part will be applied to various equipment.

14.00: The blog looks to be holding up well today, with today’s traffic already well exceeding the total for the whole of yesterday. It looks like it was one IP address – one individual or network – who was generating so many search requests on the archive database that the “resource overload” was inevitable. Thank you, whoever you are!!! 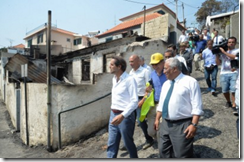 The Diario reports this evening the the Prime Minister of Portugal visited the island today, meeting with the head of the regional government and visiting displaced residents at the “RG3” army camp. The Prime Minister has similar problems back on the mainland, where there are numerous fires out of control. Meanwhile the Madeira Government Council asked for a feasibility study of the use of “air assets” in forestry and urban areas in the archipelago – to you and me aircraft dropping “water bombs” on fire outbreaks. Outcome expected in 120 days.

Funchal returning to a semblance of normality

As today progresses there is something of a feeling that the city is returning to normality. Might be too early to say this, but locals seem intent on getting on with their lives as usual – not surprising really, as in a little over six years Madeira has seen, and coped with, tragic floods, an outbreak of dengue fever, and now two major fires,  And it still managed to be voted the world’s leading island destination!