Very strong warm winds have continued overnight leading to problems extinguishing the fires at São Roque and Santo Antonio and bringing problems at the airport. Funchal Council have activated their emergency plan after a meeting with fire authorities and are working with senior regional government figures preparing for action over the next few hours. The landmark Marmeleiros Hospital at Monte has been evacuated as a precaution. More than 200 people are being provided with temporary accommodation at the military base in Nazaré and two houses have been consumed by the flames as of last night. 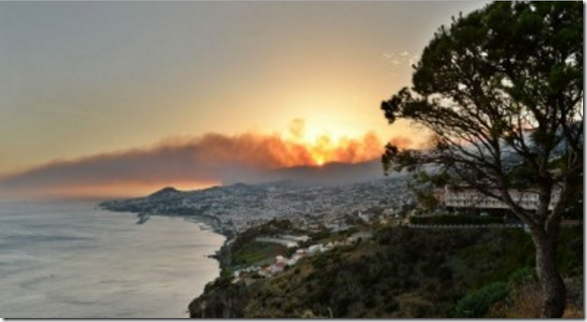 Press agency Lusa, quoted in Correio da Manha, reports that the alleged perpetrator of the fire was arrested late yesterday (Monday) and awaits interrogation in prison. Apparently police got to the source of the fire quickly and in conversation with the locals it was easy to identify the suspect. The man, aged 24, has a criminal record including arson, a Judicial Police source said.

A video has appeared on YouTube taken at just after 5.00pm yesterday

The Diario is reporting that there are now a total of four separate fires, with outbreaks being reported in Canhas  and Campanário as well as the first at São Roque and Monte. The Regional President Miguel Albuquerque is reportedly on his way to Canhas, Ponto do Sol, where there is reported to be a fire “of large proportions” 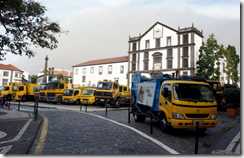 Another fire has just been reported at the Ecological Park which is a great shame. Meanwhile several roads have been closed under the emergency plan, and pictures are appearing of what the local council called “essential equipment” that was moved overnight from the waste station at Viveiros, which was  threatened by the fire, and parked in the Praça do Município. Just spoken to a colleague who was asked to leave her house at 3.00 this morning and has just returned to find neighbours have suffered considerable damage.
14 large fires are reported to be active in mainland Portugal, with 1900 fire-fighters involved.

Footage on Facebook of an Horários do Funchal bus on fire – this must be at the depot beneath São Roque which was evacuated earlier:

The Diario reports that some restaurants, cafes and shops in the city centre have already closed today, mainly because of the smoke permeating the area. The island’s largest shopping centre in Funchal, La Vie (formerly Dolce Vita) is being evacuated because smoke has entered the complex. 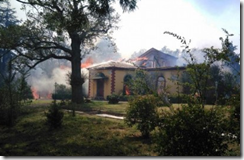 The gardens of Quinta do Monte have been consumed by the flames. This is one of the most emblematic ‘Quintas’ of Madeira, because the Emperor Charles of Austria lived and died there after his exile in 1921.
The wind seemed to abate a little late this morning but has not fully disappeared. Some areas of of Rua Pedro Joao de Ornelas in upper Pena are now considered under threat. Ash continues to fall across western parts of Funchal and some fires are clearly still active as the warm winds continue. After 24 hours you become accustomed to the constant smell of acrid burning and a layer of ash wherever you go. People with breathing difficulties must be struggling badly!

Right now, looking from the west of Funchal back at the city it looks like a war zone – black clouds of smoke rolling out into the bay. From a business point of view (Madeira Island Direct) we are being contacted by a lot of guests returning to Funchal after day trips round the island  who are being confronted by the heavy smoke and road closures. As the smoke appears to be blowing South-West our advice for the time being is to head east back towards the airport and find a cafe to sit it out for the time being. It already looks like the company may have lost one car today!

Just contacted by another guest unable to make it back to accommodation just above Campo da Barca – encountered small fires below the Rapida, not too far from the centre of Funchal. They report traffic chaos in the city centre. They also described it as a “war zone” – the Diario reports ten houses as on fire. The view of the city from a couple of kilometres west still looks grim. (20.51: residents asked by the authorities to vacate apartments immediately above Campo da Barca, report an element of panic setting in among tourists staying in the area).

The Diario is reporting very briefly that the commercial centre in São Pedro in Funchal  is on fire, and yet more fires in Calheta (Arco – pictured). The situation could be perceived to be getting out of control. I am talking to a lot of people who are genuinely concerned, including friends of doctors who are traditionally holidaying in Porto Santo at this time of year and are looking to get the earliest ferry back to assist.