Not a lot of news in Madeira over the last week, with a lot of international coverage focusing on the UK’s referendum on the EU. There was an interesting article in the Wall Street Journal a couple of days ago reporting that investors were paying more attention to the bookies than the pollsters when it comes to predicting the outcome of the “Brexit” vote on June 23rd, after the pollsters got it so wrong with the last general election in the UK. If you “follow the money”, bookmakers Ladbrokes are currently giving odds of 1/3 for “Remain” compared to 9/4 for “Leave” – so gamblers seem to believe that it is more likely Britain will stay in the EU.

On the back of the uncertainty, recent days have seen the pound drop to a seven-year low against the dollar, and sterling has continued to plummet against the Euro (above), currently at €1.26 against a high of €1.42 just three months ago. The Daily Mail asked a number of financial institutions for their forecasts if the UK voted to leave the EU – Goldman Sachs were the most pessimistic, predicting that sterling would fall a further 15-20%, “potentially dragging sterling/dollar down to around $1.15-$1.20 and lifting euro/sterling to around 90-95 pence”.

The Diario reports on a study by Deloittes  released yesterday showing that Portugal now has the second highest taxes on gasoline among EU countries when the purchasing the purchasing power of the citizens of each country are taken into account. With regard to the level gasoline taxes Portugal is only surpassed by Romania, whilst the taxes on diesel puts Portugal in fifth place among the 28 member countries. The study factored in the forthcoming increase in tax of six cents per litre on both petrol and diesel. The recent tax rises are part on the latest compliance with austerity measures which also see tax increases on vehicles and tobacco in Portugal.

The Algarve News reports that Novo Banco (formerly BES) has posted a loss of €980.6 million for 2015. In a statement sent to the Portuguese Securities Market Commission, the bank stated that the figures reflect €1.054 billion in provisions for customer loans, securities and real estate losses – a number of these in Madeira – see previous blog. The same website reports that the same bank is in urgent discussions with management over plans to dismiss 500 staff. Nearly 500 employees have already left through voluntary redundancies and retirement but the restructuring target of 1,000 has not been met.
Banif, another Portuguese bank that also had to be rescued and was recently sold, posted a message on it’s online operation that the website would be down for 24 hours earlier this week. Three days later it came back on-stream as Santander. The two failed banks (BES and Banif) between them must account for more than half of the banking activity in Madeira.

As mentioned in the Comments on the last post, the weather forecast is poor for the coming weekend, with the possibility of more rain, falling as snow in the mountains.

The English Church have asked that we publicise a forthcoming event: 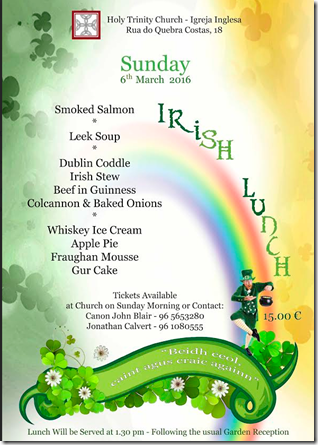