Sunday saw the election of a new President of Portugal, with law professor and well known TV “pundit”  Marcelo Rebelo de Sousa winning a clear outright majority. The centre-right 67 year-old will fulfil a largely ceremonial role, but there is a slight change to the political climate, as the outgoing president, who recently visited Madeira, did not have the power to dissolve parliament whilst being in his last six months in the post. With the the rag-tag of left wing factions, including the Communist Party, that currently form the ruling coalition being wide open to blackmail from one of the smaller parties, his powers may be required in the near future. Of course Europe looks on with keen interest as the government implements, or adheres to, the austerity measures forced on the country as a condition of its bail-out.

Today’s Diario reports that the number of fines issued for speeding offences increased dramatically last year. In the first six months of 2015, the PSP caught 1702 drivers speeding – more than in the total of 1433 fines issued during 2014. The daily average of those caught by speed cameras increased from 4 to 9, including a 31 year-old on holiday on the island, who used a friends high-powered bike to set a Madeiran record speed-camera reading of 230 kmph on the Rapida, which cost him a €500 fine and disqualification.
Parking offences were predictably the highest category, with over 8000 fines issued over the same 6-month period, whilst fines for mobile-phone use showed a dramatic increase, with fines for drink-driving and not using seatbelts both showing year-on-year increases. 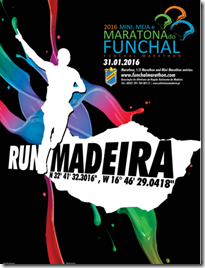 Sunday (31st) sees the annual Funchal Marathon (three races – full, half and mini), all taking place between the “Fallen Angel” roundabout above Praia Formosa (the start is on the Estrada Monumental next to the roundabout) and the city centre (the finish is on the Avenida Sá Carneiro on the seafront).
There will no doubt be the usual disruption to traffic in the Ajuda/Forum and Lido areas (the main marathon starts at 8.30 am, with a time limit of 6 hours 30 minutes). Their website can be found on the link on the graphic opposite, whilst a map of the route can be found on the link below.