JM (Journal da Madeira) reports today that TAP have announced additional flights to both Madeira and the Azores over the Christmas period due to “high demand” – adding a total of 20,000 seats to the two destinations. The period between 18th December and the 5th of January will see 16 more (round-trip) flights between Porto and Madeira, and an additional 45 flights from Lisbon. In 2014 TAP transported 244,000 passengers on the Azores route and 725,446 on the Madeira route.

Again reflecting increased demand for travel to and from Madeira, Everjets commenced their new flights last Sunday using two A320 aircaft. Headquartered in Porto, Everjets started operations with a daily return flight from Funchal to Lisbon (two on Monday and Friday) and two weekly flights to Porto. “Competitive rates” are promised and there will be no charge for hold luggage.

The new aircraft have required an investment between four and five million euros and the company is still recruiting additional staff. Everjets began operations in late 2011 with just one helicopter and an executive jet and has expanded rapidly since, with its fleet now including over 30 helicopters. Apparently, according to both the Diario and JM, not all went perfectly smoothly during the first week, as a couple of flights were technically cancelled when their status was changed from passenger plane to cargo plane. Reservations can be made online at www.flyeverjets.com

The Diario reports that this Thursday will see the inauguration of a new memorial on the seafront promenade in Santa Cruz to commemorate the 131 people who died in the plane crash at Santa Catarina airport on 19 November 1977. The sculpture is designed in the shape of a tree formed from aircraft parts, and has been supported by TAP, the Municipality of Santa Cruz and the parish of Santa Cruz. The crash of the TAP flight with 164 people on board, led to the extension of the runway from 1400 to 1600 metres (the current runway is 2781 metres) – the plane had already attempted to land twice in wet conditions. 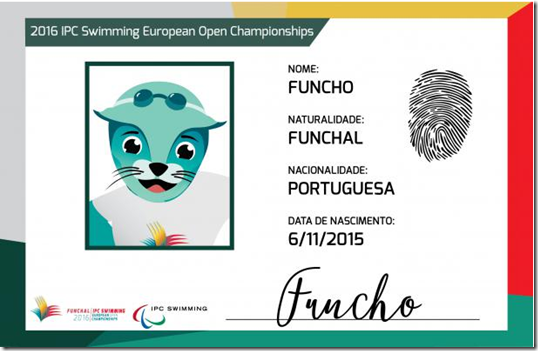 Paralympic.org reports that “Funcho” has been chosen as the name of the mascot for the 2016 IPC Swimming European Open Championships to be held in Funchal next year. Funcho is of course the vernacular name for the once abundant fennel that gave it’s name to the city