Calheta port to be privatised

The Diario today reports that the operation of the maritime facilities at Calheta will be offered to private businesses on the basis of a 30-year contract. Interested parties have 45 days before a tender process begins. The marina, shops and car-parking areas are all included in the proposed arrangement.

The marina was opened in 2004 and can accommodate 377 small boats (maximum 25 metres) and has a dozen or so staff. A lot of the buildings involved are under-utilised and some have been damaged by rock-falls. It is understood that the owner of the Calheta Beach Hotel and the new Saccharum Hotel at the other end of the marina. has expressed an interest.

The Diario earlier this week reported that the cruise ship Braemar encountered difficulties on Tuesday morning whilst docking at the new Pier 8 facility on the seafront in Funchal (below). Apparently the strong current felt after the departure of the Porto Santo ferry caused sufficient agitation that it took the ship three hours to dock. Critics of the project have always felt that the new dock was too directly exposed to the sea.

Following up on a story in previous blogs, apparently the absence of some required paperwork associated with the life-raft (that has now arrived) is the latest excuse for the non-appearance of the much anticipated cargo plane linking Madeira and Lisbon.

It’s that time of year again, so don’t forget to vote for Madeira as the “World’s Leading Island Destination 2015”. The annual competition is held by the World Travel Awards, and whilst Madeira generally does well in the European rankings (it won as Europe’s Leading Island Destination in 2013 and 2014) it generally tends to lose out at the top level to the likes of Mauritius, the Maldives, and last year, Bali. Link to vote below – closing date is November 8th: 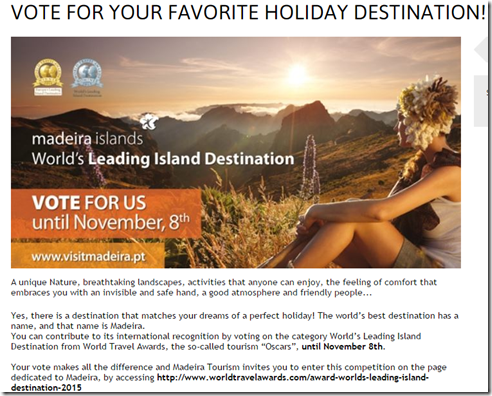 The pound broke the €1.40 barrier yesterday for the first time since mid August. Analysts believe this is a function of the euro’s weakness rather than sterling’s strength.