The lack of local news recently is highlighted by today’s on-line Diario, which leads with a report on a reduction in domestic violence on the island, followed by stories from Thailand, Brazil and wine-making in the Douro. So a few slightly older stories follow……

Farmers Market traders are worried about their future after Câmara Municipal do Funchal announced the launch of a public tender for the rental of spaces located there. Stall-holders, some with more than 20 years presence in the market, fear for their livelihood. Objecting to the changes a group of traders have presented a petition to the City Hall with dozens of signatures expressing their concerns and arguments. Santa Cruz, the municipality that includes Madeira airport, is calling for “equal treatment” after Lisbon Airport announced a “tourist tax” to boost local coffers. In the protocol signed between ANA-Aeroportos de Portugal and the Câmara de Lisboa, the company that runs the airport – purchased in 2012 by the French company Vinci – undertakes to pay one euro for each “local passenger”, ie one that arrives in the city and is not tax resident in Portugal or is waiting for another flight. Santa Cruz Câmara leader Filipe Sousa, told the Diario last week “we have discussed this matter and we do not know if it will be a tourist tax or a landing fee…..everything is open”.

Figures released by the Portuguese central government show a decrease of 5.5% in the number of crimes reported in the autonomous region in 2014 – the total of 6149 being 359 fewer that the previous year. Madeira is one of the regions with the least crime in Portugal – the statistics show a ratio of 26 crimes per 1000 inhabitants.

Easter Sunday traditionally sees the Jogo do Pião competition in Ponta do Pargo.  A game played with a near relative of the spinning top – interesting You Tube video from 2013. The rules are not immediately apparent. 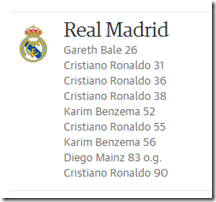 Cristiano Ronaldo struck the quickest hat-trick of his career today on his way to netting five goals in one match for the first time, as Real Madrid drubbed Granada 9-1 to move within a point of La Liga leaders Barcelona. Ronaldo’s five goals took his tally in La Liga this season to 36, four ahead of Lionel Messi who most pundits were saying is superior to Ronaldo this year. The Madeiran-born forward has now scored three or more goals 24 times in La Liga, equalling the record set this season by Messi.