With the Flower Festival taking place this weekend the full programme is replicated below as usual.The “Wall of Hope” children’s parade on Saturday morning has been covered in a little more detail on a previous blog on the Flower Festival. On a PC you can use the Ctrl and + keys combined to magnify the images below. 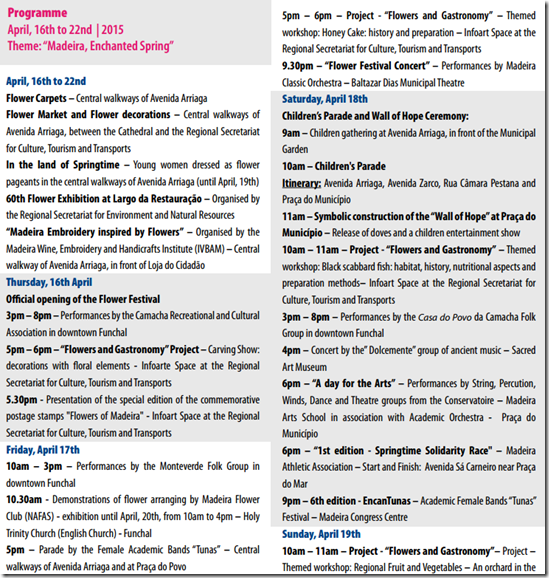 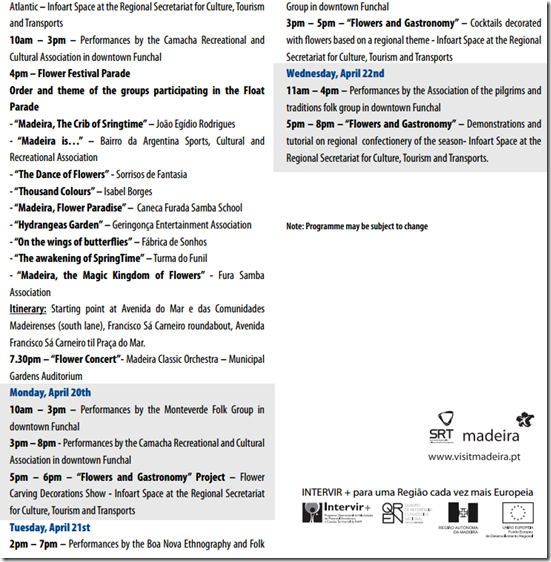 The Madeiran hospitality sector remains in good health, with growth in both overnight stays and income for the month of February 2015. National figures released last week show the bed occupancy rate in Madeira reaching 55.7% during the month of Carnival, almost double the national average (29.5%), with only Lisbon (38%) close.
The bed occupancy statistic is the best since February 2008 (57.1%) and represents a 4% growth on the previous year. The figures also show an increase in the average revenue per room by 12.5% ​​to €32.49, up from €28.88 the previous year – again this is the best since February 2008 (€33.14).

On a more negative note, the Portuguese Civil Aviation Pilots Union announced on Wednesday that they will go on strike again between May 1-10, potentially grounding most scheduled flights. TAP Air Portugal’s pilots are now demanding that they be given 20% of the company when it is privatized later this year. The Diario reports the Association of Portugal Hospitality claiming that members, “especially in Lisbon and Porto, are already seeing the cancellation of reservations as a direct result of the strike announcement", The association calculates that the strike will have an impact from the weekend of 25th April and extend to May 15, with hotels’ customers making cancellations and diverting to other competing destinations.
The walkout is part of a series of on-going strike actions by public transportation labour groups in Portugal, who are resisting government efforts to reform the sector. Around half of Portuguese train services were cancelled on Thursday as workers with national rail company, Comboios de Portugal, walked out. Trade unions oppose government plans to privatize the rail company, whose debts in 2013 stood at more than €4.4 billion.

A container with radioactive contents which arrived at the Madeira Airport cargo terminal on Thursday morning  was held by police (GNR) due to lack of certification by the driver collecting it and “inadequate means of transportation”. The package was destined for the Santa Rita Radiotherapy Unit in Funchal, which treats cancer patients on the island. The GNR were apparently stunned when they found that the person collecting the 30 cubic metre package not only had no documentation, but was also planning to use a two-seater Smart car as transport. The GNR later told the Diario that the “merchandise is there waiting for someone with the proper certification and a suitable vehicle”.