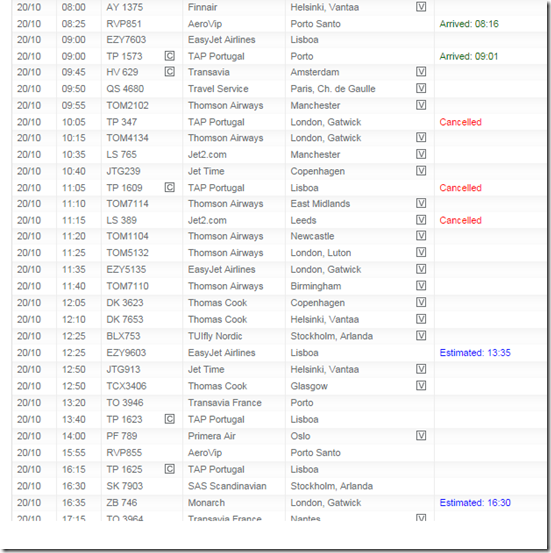 Quick update on the situation at the airport today after the high winds overnight and throughout today – the weather couldn’t have chosen a worse day than Monday to disrupt travel. Firstly, don’t believe the new ANA website – the “Arrivals” page simply don’t match the information at the airport – which I experienced first-hand this morning. Flights that were due this morning were still being shown as expected on the website – in reality five of them had already diverted to Porto Santo, with subsequent flights turning back to Lisbon and others diverting mainly to Tenerife and, presumably when that was overloaded, Faro. Three other flights scheduled to arrive later in the day were cancelled – two back in the UK and one in Lisbon. Can’t speak for Departures, but again the website is full of “holes” – this morning people checking-in for Manchester were being told there was a small delay, while one floor beneath them the information board in Arrivals would have told them their plane was in Porto Santo! The screen-snap above was mid-afternoon, which shows how poor the information on the new website is.
Looks like the airport here is now (15.00) effectively closed for the day – at least this is what friends on one of the planes in Porto Santo have been told by the pilot of their flight – they are now waiting for a time-slot to move on to Tenerife for the night (I guess there simply isn’t enough spare overnight accommodation in Porto Santo?) before trying again tomorrow. Other contacts on a flight from Lisbon have been re-scheduled for later tonight, but this is with TAP, whose pilots tend to be better qualified to land in Madeira.

A few flights now showing as arrived in the last few minutes, and a few “scheduled” times on further incoming flights tonight. Must be beginning to get back to normal, but not much happening on Departures – but I guess that’s difficult when all the planes are elsewhere! Looks like a total of 22 incoming flights never made it.

Looks like most of the flights from yesterday are now re-scheduled to land this morning from various stop-overs. 26 flights landing – hopefully – this morning before midday, with a similar number leaving before 14.00. There is still, however, a yellow weather warning (third on a scale of four) until midnight tonight due to a Portuguese Met Office forecast of very strong winds from the south with gusts of around 90 kilometres/hour, reaching 100 km/h from the middle of the afternoon. 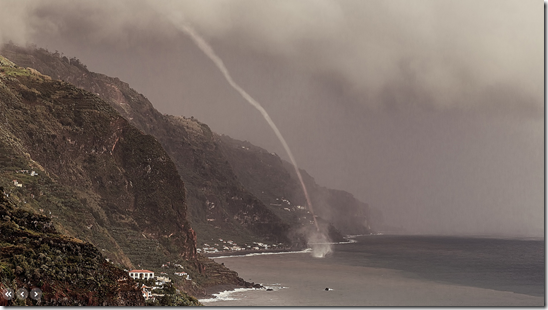