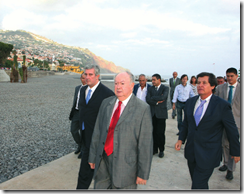 At the official opening of the first phase of the seafront improvements yesterday, the Regional President quite rightly remebered the tragic reason for the reconstruction. “After the floods that sadly marked our land, the Government decided to rebuild, renew and enhance the whole seafront views of Funchal”, said Alberto João Jardim at the inauguration of the first of the four recovery works underway on the seafront. The concern was to protect a important area of the Avenida do Mar between the Electricity Company and the Fort with essential infrastructure. “The work that is of concern here was to defend this town, defending people and property”. He stressed that it was only by chance the opportunity had arisen to create a bathing area (the pebble beach in front of the Porto Santo Maria – photos on the blog dated 11th September).

Having been selected in summer as the “Best Island Destination” in Europe for the second consecutive year, Madeira has been nominated for the world title in the same category, again for the second time. I am a little suspicious of the World Travel Awards, who like to be known as the “Oscars of Tourism “, as they have so many categories that some are simply frivolous, but I suppose any publicity is good for the island. Madeira will compete with Bali, Barbados, Cook Islands, Crete, Jamaica, Maldives (last years winner), Mauritius, Seychelles, Sicily, Santa Lucia and Zanzibar.
Also nominated for awards are three hotels from Madeira: The CS Madeira Atlantic Resort & Spa (Best Boutique Resort in Europe), The Vine Hotel (Best Hotel Design in Europe) and Pestana Porto Santo (Best All Inclusive Resort in Europe). Voting is ‘online’ until 26 October at www.worldtravelawards.com/vote . The awards ceremony is scheduled for November 29 in Marrakech.

In a week where the Governing Council approved the resolution that set the minimum monthly wage in the Autonomous Region of Madeira at €515.10 (an increase of 2% with effect from 1st October), Portugal News Online reported that the country ranked 21st out of 37 countries (European, Middle Eastern and African) in a league of average net annual salaries of senior professionals. The table is predictably headed by Switzerland, Norway and Denmark.

The appearance of the name “Central Hospital of Funchal” on one the buildings at the Dr. Nelio Mendonca Hospital at the end of last week apparently caused some surprise to  passersby and even some of the staff. According to the Diario, the clinical director, Miguel Ferreira, said this was intended to draw attention to the fact that the region has a “hospital centre of excellence, where all skills and specialties are available”. The designation “Central Hospital of Funchal” therefore refers to all the hospitals of the region, whilst Dr. Nelio Mendonca and Cruz de Carvalho hospitals will maintain their own identities. “It’s almost a marketing action – we have never had a hospital as safe as now, never had so much technology, both hardware and differentiated staff as now … “

As mentioned in the last blog the Madeira airport website (including Arrivals and Departures) has changed and old bookmarks don’t work – the listing on the Useful Links page above have been updated.

At the risk of getting into trouble I couldn’t resist copying yesterdays Matt cartoon from the Telegraph. 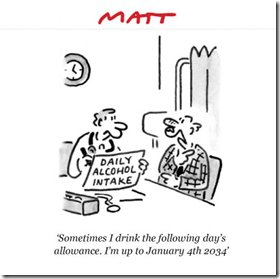