Seafront work to be completed for Christmas 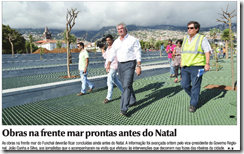 The Estátua da Autonomia was re-erected this morning in the square named after it where the streams of João Gomes and Santa Luzia converge, after last night having been transported to its place in front of the EEM building (photo from the online  Journal da Madeira/Alfredo Rodrigues). Meanwhile the Vice- President of the Regional Government, João Cunha e Silva (again pictured in the Journal) told journalists that the work would be completed on the seafront in time for Xmas

Lift out of order

The panoramic elevator at Fajã dos Padres has been out of action since the end of last week, with no date being given for it’s repair. This has meant that the only access to the bottom of the 250 metre cliff has been by sea. Not quite sure of my translation skills here, but apparently the elevator cost €7.50 per return trip, whilst the boat trip was €7.50 each way. From what I can make out, the cost of the boat trip has been halved for the time being – somebody may be able to clarify this? Hopefully the restaurant there will not suffer as a result.

The Diario reports today on the lack of progress that has been made in the harbours of Santa Cruz (above) and Machico, nearly nine months after the south coast of the island took a severe battering in heavy storms. Apparently some of the delays have been due to confusion over the “trusteeship” of some of the affected spaces. However recent legal directives seem to indicate that the ports authority, APRAM, assumes responsibility – which it has always denied. Hopefully we will see the replacement of the floating walkways and other work shortly (a bathing platform has been put to use as a pontoon in Santa Cruz in the meantime). The new walkways are reported to have been available since the end of May waiting for the dispute to be resolved.

The 9th City of Funchal Dog Show takes place this Saturday, September 6th at 3.00pm. in the Lido Gardens – this is the large landscaped area beneath the Port Mare and Eden Mar hotels. The event is supported by Câmara Municipal do Funchal and the company Frente Mar Funchal which administers various public places on the seafront. Dogs of pure or mixed breed, aged between 4 months and 10 years, are eligible to compete, provided they have been vaccinated. Evaluation will be by the international judge of the Portuguese Kennel Club, Francisco Salvador Janeiro.

12 thoughts on “Statue of Autonomy raised. Seafront work to be completed by Xmas. Fajã dos Padres.”