A 24 hour strike by TAP pilots is taking place today. The Civil Aviation Pilots’ Union, which represents the company’s almost 900 pilots, says work conditions have slipped ahead of the airline’s planned privatization. Some flights are still operating – details on the flag carrier’s Facebook page: http://tinyurl.com/nqo6r9n Plenty of notice has been given and passengers allowed to switch flights or being given a full refund, so this shouldn’t cause too much disruption. The action is clearly targeted at the "peak “summer getaway” period – the state-owned airline on average carries some 42,000 passengers on about 350 flights a day in August.

The Diario reports that the Trade Union for Madeiran hotel workers will promote a "distribution of announcements in several languages, including German, English and French, to clients of hotels in the region". The Union claims that whilst there has been an increase in tourist arrivals and revenues in recent years, employers have continued to refuse to consider wage increases “which have been non-existent for two years". The leaflets will be handed out over the next month at 12 hotels. 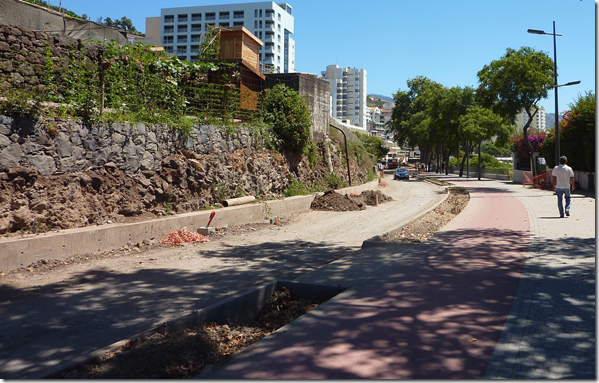 A couple of months ago it looked like the “new” road, replacing the old Estrada Monumental connecting the Lido to Ajuda was nearing completion. However, little progress has been made since, with no sign of the finishing touches being applied or the road being surfaced – in fact the road seems to have been dug up again in places. I wouldn’t like to be working on reception at the Alto Lido hotel, which is caught in the middle of the project – over the last year or more they must have had a lot of disgruntled guests having to to take their hire cars “off road” to gain access. There must also be a good few shops and restaurants that have been adversely affected – conditions are very dusty at the moment (the photo above was sent in a couple of days ago).

Another taxi driver demonstration has been called for next Tuesday (August 12 ) in the Praça do Mar in the port of Funchal. The protest is scheduled for 10.00 am with the aim of stopping taxis in Funchal for a day. The first demonstration last week was attended by over 100 taxi drivers and meant that taxis were scarce around central Funchal. The taxi drivers are protesting against unfair competition from other vehicles carrying tourists, including the increasingly popular ‘tuc-tucs’, which apparently operate with the same license covering several vehicles – a situation considered illegal by AITRAM, the body representing the taxi drivers. One  taxi driver, described as “old guard” in the Diario claimed that “it is necessary to combat authorities that do not work, and some corrupt politicians who give permission for everything and anything". "Taxis at the moment spend all day to do just one or two trips," said an AITRAM spokesman. The Portuguese Labour Party deputy, José Manuel Coelho, attempted to join the first demonstration but was prevented by the taxi drivers, who wanted it to be clear that the action was not political.