The Diario reports that at least two hammerhead sharks were sighted today (Wednesday) in the Poças do Gomes/Docas do Cavacas bathing complex at Ponta da Cruz. According to Carlos Jardim, company administrator for “Frente Mar”, the seafront management organisation, these sightings "are normal" due to the number of jellyfish that have appeared in the last few months. "The hammerhead sharks feed on jellyfish, so it is normal to come closer to shore to feed," said Jardim. The sharks were about a metre and a half long and swam around the complex for an hour. Wikipedia reports that of the 11 known species of hammerhead, three can be dangerous to humans – as of 2013 there have been 33 attacks, but no fatalities.

The  volcanic rock pools of Poca do Gomes are among the best known sights in the main tourist area immediately west of Funchal. The basaltic “pocas”, which translates as “puddles”, were originally formed millions of years ago from volcanic eruptions. Poca do Gomes owes some of its publicity to Doca do Cavas, the well-regarded seafood restaurant perched on the cliff above the pools. The small bathing area surprisingly does have facilities including shower rooms and changing rooms, and a small bar has been open this summer.

Perhaps motivated by Madeira being named “Europe’s leading island destination” for the second year running by the World Travel Awards, Travel Magazine have featured an article entitled “24 hours in Madeira” (link opposite). Really not sure about the World Travel Awards recently – when you look at the never ending number of “winners” they announce, in an ever increasing number of categories (here), it is more remarkable if you don’t appear on the list at some point. The Vine retained its position as Europe’s Leading Design Hotel. The magazine article, as pointed out on Trip Advisor, is good for first time visitors or people stopping over on a cruise.

Apparently the company that runs the Porto Santo ferry is tightening up on qualification for discounts for those living on the island – more proof of residency will be required. 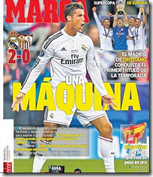 There seems to be no end to the achievements of this most famous Madeiiran. The Daily Mail reports “Cristiano Ronaldo is still the master. That is the claim from the Spanish press after Real Madrid’s 2-0 win against Sevilla saw them lift the UEFA Super Cup”. Ronaldo upstaged new signings James Rodriguez and Toni Kroos, as well as Gareth Bale, scoring twice at the Cardiff City Stadium on Tuesday night. The new “Galacticos” made headlines on Wednesday morning throughout Spain: http://tinyurl.com/mftgaug