A repeat of the disruption to air travel in 2010 is becoming more of a possibility as seismic activity is reported to be increasing again in Iceland. The BBC report this morning that Iceland has issued a red alert to their domestic aviation industry due to the Bardarbunga volcano, meaning significant ash emissions are likely. The Icelandic Met Office has warned that a small eruption under an ice cap has begun at Bardarbunga. The air space over the site has been closed, but all Icelandic airports currently remain open, authorities say.

Late on Thursday night the Navy rescued three crew members of a pleasure craft that had sunk between Madeira and the Desertas. All three were reported to be in good condition, with one having a minor leg injury. They were found adrift in a small inflatable dinghy, about four miles from Deserta Grande, after dialling 112 from a mobile phone. Apparently, smaller craft (this was a “Recreational Vessel Type 4” – whatever that is) are allowed to sail between Madeira and Porto Santo under the rules of a regional decree, as they are always within 12 miles of one or the other coastline.

By a complete coincidence yesterday’s Diario carried a story on the same subject, reporting that the parliamentary leader of the PS-M believes it is possible to have a new sea route between Madeira and the mainland operating at the beginning of next year. In May his parliamentary group submitted a proposal to discuss the matter, which apparently became bogged down in a backlog of other propsals, but it is now hoped that it can be brought forward to the first plenary of the next legislative session in early September, when MPs return.

The village of Caniço hosts its annual showcase of “gastronomic delights” from the 27th to the 31st of August. This is promoted by the local parish council (Junta de Freguesia do Caniço) in partnership with some restaurants and bars in the area, and features various groups / musical bands. Details on their Facebook site: https://www.facebook.com/freguesiadocanico

Speaking of Facebook pages, the blog has launched a new page – if anybody wants to add to it feel free! There have been a couple of half-heated previous attempts over the last few years and it was felt that a new start was required – unfortunately we have had to discard 500+ friends in the process! There is now a “Like” button on the right sidebar of the blog, and we hope to add one to each post when the technology gremlins have gone away.

The month of August will become hotter in the coming days. According to the forecasts of IPMA (the Portuguese “Met Office”) temperatures expected for the South Coast, North Coast and Porto Santo have placed these three regions under yellow alert due to the “persistence of high maximum temperatures” at least until tomorrow (Monday).

Looks like things are finally moving on the “new” old road between the Lido and Ajuda. We finally have a road surface and the beginning of some landscaping Thanks to David for these photos taken over the weekend: 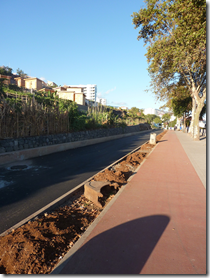 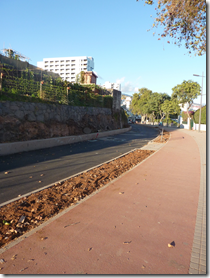 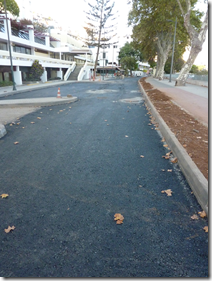 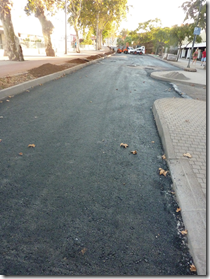