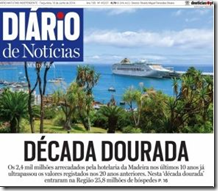 The Diario reported on Tuesday that “the last decade was a golden decade for the regional hospitality sector”. This referred to data from the Regional Directorate of Statistics showing that regional hospitality grossed € 2.4 billion over the past 10 years, a figure that  exceeded the values ​​recorded during the previous 20 years. This ‘golden decade’ saw Madeira welcome 25.8 million guests. I guess that this emphasises how much the island’s economy has come to completely depend on tourism.

The blog was recently asked to provide background information and act as guide for the day when the European Sports Correspondent of the New York Times flew in from Paris to be joined by a photographer from Barcelona. Their interest, of course, was in a certain “soccer” player called Ronaldo, with the USA being in the same group as Portugal (they play each other on June 22nd). Apparently most Americans know only the one Portuguese player and naturally assume that he comes from the mainland. Quite an interesting day, meeting his cousin at the museum, sister at the CR7 shop, and former Presidents of his local club Andorinho. The outcome was the large feature in the NYT below, which did not go down well when the Diario covered it – a few readers took umbrage with the comparison of the poorer areas of Funchal to the “favelas” of Rio – but the most lasting impression was actually how poor the family were when he was young. 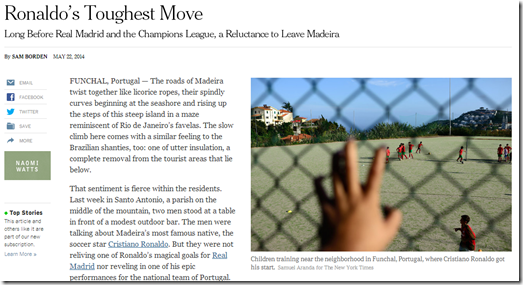 Talking of the (very modest and unassuming) photographer, Samuel Aranda, I didn’t realise I was having a beer with a winner of the World Press Photo of the Year!

The Largo da Restauração (outside the Golden Gate) is this weekend hosting the XXV Regional Bread Fair, featuring breads from throughout the Island. The Lions Club of Funchal is responsible for the initiative, with the aim of raising funds to continue carrying out social projects on the island.

The “local” lido at the back of the Old Town (at the very end of the Rua de Santa Maria) is set to re-open on Moday – and in general a lot of the seafront works seem to be nearing completion at that end of town.