The Diario reports today on plans to add six buildings, each of ten stories, to the Dr. Nelio Mendonca Hospital – the main hospital on the island. A lot of construction work has already been undertaken recently, so I’m not sure how much of this is old news dressed up as new news – there are  some ambitious artists impressions on various website going back a number of years. The planning implications and the impact on “green belt” are to be discussed today by the Câmara do Funchal.

This pyramid-selling scheme continues to grow on the island despite being outlawed in many countries. I do actually know people who have made reasonable amounts of money by joining a year or so ago and recruiting new members, who recruit new members etc etc. The scheme has courted controversy in the local press with people condemning it as illegal whilst others defend it – recent articles in the Diario online have attracted 500+ comments. The Telexfree Madeira Facebook page has 2000+ “likes”.

Telexfree idescribes itself as a “multilevel marketing” company that counts about 40,000 subscribers in Madeira in just eighteen months of operation. These are people who joined the “business” with a minimum initial investment of 1035 euros, the amount for opening an ‘account’ – they subsequently place ads on the internet and recruit members on the same basis for which they are paid a royalty (didn’t this used to be called a “Ponzi” scheme?)

More links are added to this page (see tab above) as a result of suggestions from readers together with informative sites unearthed whilst trawling the internet. The latest is a link to the recent Aixpert aerial videos of different parts of Madeira

The blog has found an opportunity to illustrate the work of a local artist specialising in painting the local flora. Angie Gray has just been awarded full membership of the Society of Botanical Artists (UK) after they viewed her paintings on selection day for their London exhibition titled “Botanical Garden” – to be held at Westminster Central Hall in London between 9th – 18th May (details on the SBA website). She submitted a painting of the tulip tree and Canna indica, plus 3 other paintings in application for membership; along with a written article on Madeira being “The Floating Garden of the Atlantic”. I won’t publish them all here, but tag one on to the end of each of the the next few blogs. The first is the Heliconia below: 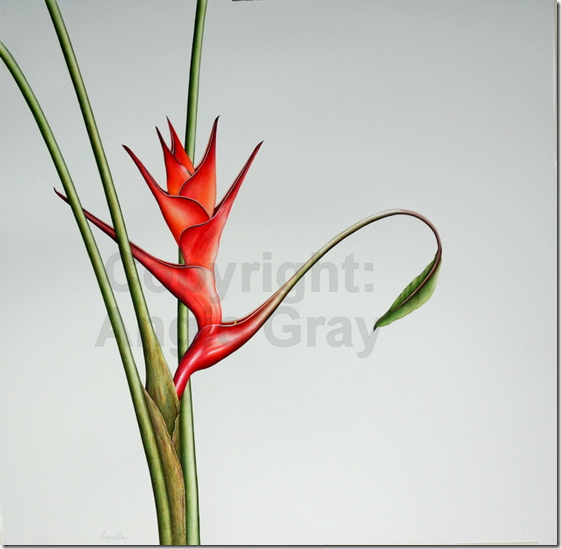