Jon Parsons kindly sent in the following “public information” update those officially resident on the island – having been  stopped by the police recently!

Following a recent "meeting" with our local (Funchal) G.N.R. and subsequent discussions, I would like to give a "heads up" re recent new DRIVING Licence law amendments. This in particular affects Portuguese residents, both National and "Immigrant" PERMANENT residents…As far as I can ascertain, it goes like this:You must register your (U.K.) licence issued by another EU or EEA country when you become a resident here in (Madeira) Portugal. You are obliged to register with their regional or district Department of Motor Vehicles (IMTT) office within 30 days of establishing residency.

Further (and this is part of the "new" bit) you must also (as a permanent resident in Portugal) exchange your (U.K.) licence within two years of the date on which their residency is confirmed, for a PORTUGUESE one – and then be bound by this countries legislation:

To renew a Portuguese driving licence for the first time, drivers require a medical certificate proving they are fit enough to drive. Renewal requests can be made at the IMTT office or the nearest citizen’s shop (Loja do Cidadão).

All drivers of Category A, B, B+E and Sub-Category A1 and B1 vehicles aged 50, 60, 65, and 70 are obliged to renew their driving licences. After age 70 renewals must be applied for every two years. The rules cover several types of vehicle including motorbikes, cars with a weight limit of 3.5 tonnes and vehicles with tow bars.

Exchanging a licence for a Portuguese one can simplify things in case of loss or theft and in order to obtain car insurance. However, after the Portuguese licence has been issued, the original is withdrawn and returned to the issuing authority.

Plus, as and when your U.K. licence expires (or is stolen/lost) you will have to take a written and practical driving test here for your first issue Portuguese licence.

Exchange it before it expires, you can no longer legally drive here on a U.K. licence (with a U.K. address) when you are permanently resident here for more than TWO years.

Thanks again Jon – I’m sure you’ll save somebody a lot of trouble! He did philosophically add a footnote to the above, saying that “apart from a 60 euro fine, 55 euro for a medical (passed!) and 25 euro for licence application, it didn’t cost me a cent! However, I am well and truly legal, insured and very righteous now!”

The Madeiran-born footballer was in spectacular form in the World Cup qualifier on Thursday, a few after losing his “most expensive” player tag to Gareth Bale. The hosts looked to be on course for a stunning upset until Ronaldo struck. In so doing he went past Eusebio in Portugal’s all-time scoring charts at Windsor Park (43 goals for his country to date) and did it in a manner befitting the great master according the Daily Mail “The Real Madrid forward cut a frustrated figure before a stunning 15-minute hat-trick” took him beyond Eusebio’s 41-goal tally and into second behind Pauleta. Five more goals and top place will be his.

You can see the goals on You Tube: http://www.youtube.com/watch?v=j1ONpyGqi1k

As promised, details of the forthcoming Shakespeare Night: 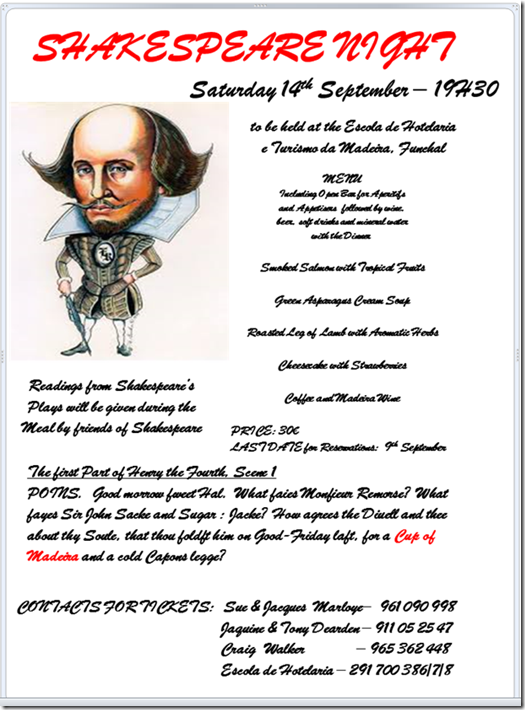