Bit of a “back to work” feel about Funchal this week after most of the locals seem to have had most of August as holidays as usual. Schools still closed for another few weeks (I thought there were plans to reduce the length of the summer holiday here?). As per previous blogs there still seems to be a lot of tourists around, which is great news for the island if it can be sustained! – you have to ask “what economic crisis”? I guess with various politicians back at work across Europe we will be hearing more on this count, although lots of positive economic data from the UK recently. German elections in three weeks will have a significant bearing on the future for the more profligate members of the Eurozone – will they continue to be bailed out? The Diario makes bleak reading locally, reporting on Monday that three businesses in Madeira are closing each day:

733 businesses closures so far this year

Since early this year, the business world lost Madeira 733 companies, most of which have been voluntary closures. According to data published by the Ministry of Justice, the Autonomous Region lost an average of three business days for the first eight months of 2013. This is faster pace than last year (1,009 company closures in total). 560 companies have been created in the same period but the net balance is still negative (-173 companies). Some of the larger businesses on the island have restructured, contributing to the figures, whilst others have moved abroad, Apparently the Free Trade Zone is still attracting

The company that won the tender for the recreation of the old “Comboio do Monte” train ride, a project of seven million euros, which included the construction of the line with a length of approximately 1300 meters to linking the Largo da Fonte ao Terreiro da Luta was one of the statistics. Last year, the municipality of Funchal had already announced that the company gave up the project, but it was only on 8 August when the dissolution of the company was formalized.

At the weekend Madeira was elected as the best island destination in Europe in the World Travel Awards ceremony in Antalya, Turkey. The archipelago won in a category that also competed Balearic Islands, Canary Islands, Cyprus, Malta and Sardinia. Three Madeira hotels also won in the categories in which they competed: Quinta da Casa Branca (Best Mediterranean Boutique Hotel ) (surely that should read Madeira?), The Vine Hotel (Best Design Hotel in Europe) and Reid’s Palace (Best Hotel in Portugal). I’m not entirely sure on the validity of these “World Travel Awards” – ever since I registered my vote for Madeira a few months ago (and I recall encouraging others to do so) my inbox has been deluged with e-mails from them encouraging me to vote for other random destinations!

I know this isn’t really relevant to Madeira, but it shows the way things are going:

Ryanair recently raised the cost for passengers taking luggage in the hold of its planes from 30 euros to 50 euros (£43.60) for the busy summer period. The no-frills carrier’s chief executive Michael O’Leary, also said it intended to increase baggage charges until no-one took its flights with hold luggage. He confirmed that Ryanair had increased its charge for hold luggage by 20 euros until the summer’s end because "that’s when they are likely to bring more bags". Mr O’Leary went on: "We will keep increasing charges until we get rid of (hold) bags" – Ryanair had reduced the number of its passengers who checked in hold baggage from 80% to 19% and that this was saving the airline "a fortune in money" (his exact words, not mine).

Asked if Ryanair would consider charging for hand luggage, Mr O’Leary said: "At some point in the future I think it’s likely that airlines will do it but I can’t get my head round how you would do it. I think it’s unlikely that we will do it". Ryanair also recently announced that it would get its pilots to increase flight times by two minutes to save fuel, saving the airline around £70m a year. Asked if he was considering reducing the amount of air conditioning on his flights, Mr O’Leary said: "No. Even I would not do that."

The Mail online pointed out that baggage fees from the likes of Ryanair are now so high that it can be cheaper for holidaymakers to use a specialist courier. For while Ryanair would charge £35 to put a standard 20kg suitcase in the aircraft hold on a one-way flight to Malaga, the courier firm SendmyBag would do it for £6 less.This means that a family of four could save £48 by sending their luggage by a courier to their holiday destination and back rather than taking it on a plane.

Finally, we have heard from the blog’s resident photographer in Gaula, Jon Parsons, who felt that after the recent sunset photos, sunRISE wasn’t getting a fair deal – so he attached one of his to right the balance – the view from Casa Parsons 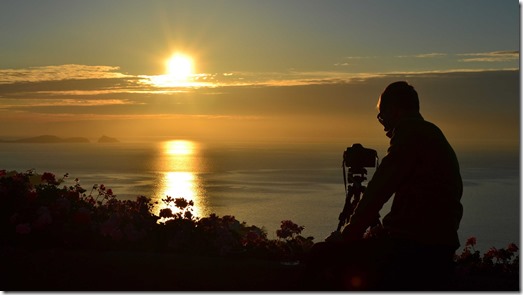