Re-opening of Sá stores may be delayed

The reopening of the nine “Sa” hypermarkets under the management of Continente/Sonae may not happen this summer, contrary to what was expected. The legal procedures approving the reorganization plan for the Jorges Sá company has been on-going for about a month, but an objection by the security services company Securitas may cause the process to drag on for several more months. Securitas was owed about half a million euros, and like other creditors, was called to vote on the recovery plan. Unlike the majority of creditors they voted against the terms of that document citing various reasons. Firstly, the security group invoked the “gross violation of the rules” because the recovery plan does not specify how it will manage a portion (26.7%) of the debt which is scheduled to be paid within 15 years Apparently several documents (investment plan, forecast operating account and statement of estimated cash flows) have not been presented. They also point out the violation of procedural rules (this is a bit technical but seems to rest on the case that is not the firm ‘Jorge Sá’ "was not in difficulty or insolvent – merely imminent" and that "the negotiations took place in an abnormal way". Thirdly they complained that the situation under the recovery plan is less favourable than if the company was simply dissolved and its assets liquidated. In this regard, Securitas noted that ‘Jorge Sá’ owned several properties at tax value of 6.5 million euros, whose proceeds would revert to repay part of their debts.
The civil court of Funchal has not agreed with any of these arguments and may eventually approve the recovery plan. Securitas, however, has not given up and resorted to the Court of Appeal of Lisbon. The Diario reports that Securits are, however, making themselves available for dialogue. The Diario reports that this summer the sea-front on the busiest beach in Funchal, Praia Formosa, will be “enhanced with the provision of a support service for recreational water activities”. Jet skis, kayaks and other vessels will be offered for hire. The Captaincy of the Port of Funchal has awarded the license to support recreation in Praia Nova (at the western end of Praia Formosa) where a marked sea corridor will allow access to vessels. On the eastern end, opposite Formosa Beach, but away from the coastline, a circuit for jet skis will be created by the placing four buoys. Apparently the jet-skis are equipped with a "cross-stream distance" device – if the user does break the rules and risk leaving the perimeter of the established circuit  "the controller can remotely trigger the cross-current and immobilize the jet ski."

The Telegraph and others report that British bingo players were arrested by police in Portugal for playing the game for biscuit and chocolate prizes on Friday. They were questioned by police for four hours under strict gambling laws which mean organisers of bingo or raffle nights have to apply for a one-off government licence. All 30 customers – aged between 23 and 76 – were arrested and those who were not playing the game were arrested for "observing a crime". The arrests came two weeks after two plain-clothed police officers were first seen in the pub, the Yorkshire Tavern, in the Portuguese resort of Albufeira. Pub landlady Marianne Pittaway, 34, who could face fines up to £8,500, told The Sun: "They rounded us all up like a bunch of gangsters at about 11pm. It was 3am by the time they let us all go." Six of those arrested on Friday have returned to the UK while the remainder are due in court today for further questioning. Ms Pittaway, who runs the pub with her Portuguese partner Antonio Cardoso, 47, told the newspaper: "I thought bingo was only illegal if cash prizes were being handed out. We were just giving away a few little prizes for fun."We took about 50 euros from customers to cover the cost of prizes. We didn’t make any profit.”The plain-clothes officers waited for the prizes to be handed out before using radios to call for an extra 12 officers.The customers were taken to a police station on a mini-bus while officers took the remaining prizes, the bingo machine, cards and pens plus a microphone and speakers, as evidence.Last night police in Albufeira refused to comment.

Continuing the sequence of photos, it looked like the Beatles Boat was making its last appearance in Funchal this afternoon (Tuesday) as it was helped from its bearth, leaving only a water-filled hole behind. The relentless progress of the new seafront can be seen behind. 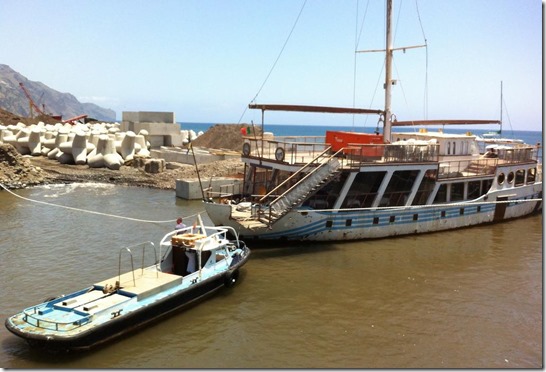