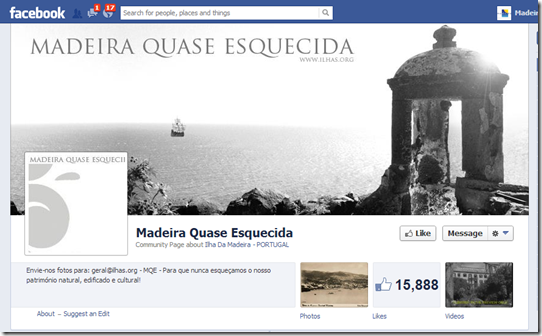 As MartinPN mentions in the last Comments section (thank you Martin), the Diario reported yesterday that round 1,500 images that portray a "Madeira almost forgotten" are available on Facebook, with more than 15,500 fans. This is a project that is aimed at attracting in particular emigrant communities in order that they feel less distant to the island. The idea was conceived by Don Amaro, a Dutch computer technician and son of a Madeiran who is interested in the heritage of the island, who challenged Hugo Reis, owner of a large collection of old pictures of Madeira, to create the page "Madeira almost forgotten". The page was created in April 2011 in Facebook with photos distributed over fifty albums showing places, traditions, crafts, buildings, personalities that have marked the past and everyday life in other times, recording an average of 100 "likes" by day (the 15,500 “likes” reported yesterday has already risen to nearly 15,900 since the article in the Diario). I have been aware of Don Amaro through his work on the internet for some time, and know how passionate he is about  the island and its history.

"It all started because we noticed a gap with respect to the assets of Madeira and its recovery," added the collector and photographer Hugo Reis, noting that this project also aims to "draw the authorities’ attention to their conservation." He added that "much of the ‘visitors’ are people off the land, emigrants," who like the page because it reminds them while they were scenes that lived in the region, "stressing that the project" is growing at a fast pace ". A small group have been assembled with  expert historical knowledge to work on the project. The photographer noted that the group works "without support from official bodies, leisure, bear all the costs associated with activities that develop," doing everything "for the love of and the heritage that is often degraded and in a sorry state."

The group wants to continue to "work harder and better," is preparing a website and was invited to publicize the work in the FNAC bookstore in July, which includes an exhibition of photographs that will be on display during two months. There are some brilliant photos and the work of the group is to be highly praised: https://www.facebook.com/patrimoniomadeirense

Yesterdays Diario covered the story of the Charity" “Cáritas Diocesana do Funchal” deciding to consign to rubbish bags containing dozens of items of clothing and footwear that were intended for victims of the storm of February 20, 2010 which had been stored in warehouse in the Nazaré area of Funchal. Apparently local residents were incensed with the order given to remove the donations remembering the needs of thousands of families – a waste compressor belonging to the Municipality of Funchal turned up unexpectedly yesterday morning. They were confronted by a group of mostly women who demanded explanations from city officials about why the operation had been ordered."They said they had orders not to let people take anything and that was to take away the trash", said a local resident who witnessed that fifty bags of 100 litres of clothing in good condition were collected.

"They were all good clothes, throw away is a crime when so many people need," rebelled Maria José Freitas who claims to have seen brands such as Cortefiel, Massimo Dutti, Prenatal, Benetton, Salsa, which were donated by the stores to be compacted in the trash wagon. The charity later issued a statement saying that the donations had been removed due to contamination.

From 1st June guided tours will be conducted around the Jesuit College of Funchal. Founded in 1569 by royal charter of King Sebastian, the building was completed a few years later and become the largest building in Madeira for centuries.

“Setting the activity of religious institutions, military and civilian, the building of the Jesuit College is an architectural mixture resulting from the reforms made ​​by each occupant with several details of interest related to episodes of national and international history.
Besides the architecture, the College has a impressive collection of furniture and art, much of which originated from the Quinta do Monte, where Charles Habsburg, the last emperor of Austria, lived and died ”

The tours are conducted in English or Portuguese.They are organised by the Academic Association with the support of the University of Madeira, whose mission is to conserve and present a set of assets that, by their historical, artistic, scenic, scientific, social and integrates heritage cultural and architectural heritage of the city of Funchal Guided tour runs Saturdays at 10 am, at 11.30 hours and at 13 hours. Each visit lasts approximately 50 minutes. Admission is 5 euros for the general public and may be purchased at the Gaudeamus – the University Shop at the entrance to the College. Students and adults over 65 have a 25% discount. Guided tours may be held at any other day of the week by appointment-  telephoning or sending an email colegio@aauma.pt

Getting worried about mosquitos this year, having been nibbled a couple of times already, and came across an interesting section on insects on About.com. Apart from the obvious about only females biting, there is the interesting fact that mosquitoes can detect carbon dioxide from 75 feet away. Carbon dioxide, which humans and other animals produce, is the key signal to mosquitoes that a potential blood meal is near. They only travel at 1-1.5 miles per hour, but their wings beat up to 600 times per second.