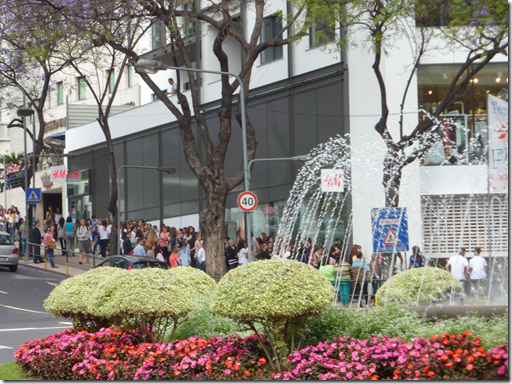 It was quite a compliment to be invited “behind the scenes” immediately prior to the opening of the new H & M store at the Edifício Minas Gerais at the Rotunda at the bottom of Avenida do Infante, between the old Marina Shopping Centre and the new Dolce Vita development. This, I am sure, was due to the increasing popularity of the blog and the associated Comments” rather than the parent web site! It was quite eye-opening to be given background details by their PR Officer, who had flown in for the day – thank you Inês. 29 jobs have been created (another 27 follow at the new store in the Forum (the old Radio Popular shop on the ground floor) at the end of the month – but the strange thing is that there are still unfilled positions. These are mostly managerial, and are currently filled by temporary secondments from Lisbon. You would have thought that in these economic climes that there would be no shortage of takers, but apparently they are struggling to find applicants with the correct experience. Presumably the name “H & M” will be pronounced “Agar e M” in Portuguese? Total employees world-wide 104,000

German euro founder calls for ‘catastrophic’ currency to be broken up

The Telegraph reported last week that Oskar Lafontaine, the German finance minister who launched the euro, has called for a break-up of the single currency to let southern Europe recover, warning that the current course is "leading to disaster"."The economic situation is worsening from month to month, and unemployment has reached a level that puts democratic structures ever more in doubt," he said."The Germans have not yet realised that southern Europe, including France, will be forced by their current misery to fight back against German hegemony sooner or later," he said, blaming much of the crisis on Germany’s wage squeeze to gain export share.

Mr Lafontaine said on the parliamentary website of Germany’s Left Party that Chancellor Angela Merkel will "awake from her self-righteous slumber" once the countries in trouble unite to force a change in crisis policy at Germany’s expense.His prediction appeared confirmed as French finance minister Pierre Moscovici recently proclaimed the end of austerity and a triumph of French policy, risking further damage to the tattered relations between Paris and Berlin."Austerity is finished. This is a decisive turn in the history of the EU project since the euro," he told French TV. "We’re seeing the end of austerity dogma. It’s a victory of the French point of view". Mr Moscovici’s comments follow a deal with Brussels to give France and Spain two extra years to meet a deficit target of 3pc of GDP. The triumphalist tone may enrage hard-liners in Berlin and confirm fears that concessions will lead to a slippery slope towards fiscal chaos.

German Vice-Chancellor Philipp Rösler lashed out at the European Commission last weekend, calling it "irresponsible" for undermining the belt-tightening agenda. It appears that the Franco-German alliance that has driven EU politics for half a century is in ruins after France’s Socialist Party hit out at the "selfish intransigence" of Mrs Merkel, accusing her thinking only of the "German savers, her trade balance, and her electoral future". Mr Lafontaine said he backed EMU but no longer believes it is sustainable. "Hopes that the creation of the euro would force rational economic behaviour on all sides were in vain," he said, adding that the policy of forcing Spain, Portugal, and Greece to carry out internal devaluations was a "catastrophe".

Mr Lafontaine was labelled "Europe’s Most Dangerous Man" by The Sun after he called for a "united Europe" and the "end of the nation state" in 1998. The euro was launched on January 1 1999, with bank notes following three years later. He later left the Social Democrats to found the Left Party.

Validity of Portuguese motoring fines on foreigners in doubt The Portugal News reported last week that a complaint lodged by an Australian national for not having the details of an alleged transgression written in English, has set the wheels in motion for what could amount to considerable change in Portugal’s Highway Code relating to foreign motorists.

The case in question arose from the fact that the complainant was unclear as to what offence had been committed and what law had been broken. The resulting grievance lodged with the Ombudsman, enshrined by the Constitution as the guardian of the people’s rights in Portugal, has now resulted in a recommendation urging the government to change the law or be responsible for not closing a potential loophole for foreigners who do not understand Portuguese and which could allow them to not pay fines.

In a recent ruling stretching eight-pages, the Ombudsman or Provedor da Justiça, casts serious doubts over the procedure of issuing fines. Alfredo José da Costa established the fact that written fines in Portugal are not in any other language “such as in English” is in direct contravention of the Penal Procedure Code and means “cases which occurred up until now could be nullified. This model is considered impractical and needs to be altered.”

The authority has, due to these grey areas, called for sweeping law changes to govern the handling of non-Portuguese speaking foreign drivers whenever there is a breakdown in communication with law enforcement authorities.The Ombudsman, in its ruling, accepts the impracticality of having an interpreter present whenever a fine is issued to a foreigner. As a result, it has called for a law change incorporating existing legislation regulating the rights and duties of detainees, while specifically calling for fines to be translated into English. It explains the “universality” of English “is unanimously recognised” and having English as a second language “safeguards the duty of informing the overwhelming majority of road users.”