More than 511,000 “tourists in transit” passed through the port of Funchal until November pouring into the regional economy an estimated 40,880,00 euros.

This is based on studies showing that a cruise tourist spends, on average, during their visit to Madeira, 80 euros, five euros more than they spend in the Canaries. There is also the expenditure made by crew members of ships made stopovers in the port in the first 11 months of this year. It is understood that their spend is above 80 euros for each crew member.

The goal that was set by the current president of the board of the port – APRAM – was to reach 600,000 passengers by the end of this year. This would set new records and if this objective is achieved, it will represent a contribution to the regional economy at least €48 million in spending by tourists only.

Port authorities also benefit from this increase in visits to the port of Funchal. Fees paid by the ship owners of between 20 to 30 thousand euros, are their main source of revenue. The amount charged varies depending on the number of passengers and tonnage of vessels calling at our port but, according to calculations, the 288 liners who visited this year resulted in revenues of more than 5,760,00 euros. This is calculated on the basis that each of the 288 ships paid a rate of only 20 thousand euros.

Madeira illegally withheld more than €18 million from the mainland

The The Court points the finger at the government of Alberto João Jardim.

The Diario reports that the Court of Auditors have found that between 2004 and 2011, the Regional Government of Madeira illegally withheld more than 18 million of revenue share levied by “registries and registrars” in the region that rightfully belonged to the State.

"From 2004 to 2011 the Regional Secretariat of Planning and Finance (SRPF) illegally withheld a portion of the revenues assigned to the State (…) totalling €18,129,933.69 on the grounds of the Region have revenues receivable from the State which had not yet been transferred and waiting (…) certification by the National Authorities, "reads the document.

The report also points out that "under the opening credits of illegal special budgets in 2009, 2010 and 2011 (as well as the change in the accounting rules of the revenues generated by the external service Draj) fiscal revenue recorded in the accounts of the Region of those years under "miscellaneous fees" (…) is overstated. "

Disputing the report, the Regional Secretary of Planning and Finance, Ventura Garcês said he "disagreed with the assessment," arguing that the "calculations in question are effectively the region (…) and are assigned to compensate for skills ensured by the Ministry of Justice reflect equally the payment for a service rendered by an entity external to the Government. "

In this analysis, the TC considered that the internal control system of Draj in the area of ​​outsourcing, "is deficient, particularly in terms of revenue collection and its control."

Thanks again to Peter for this – full story here: http://www.dn.pt/politica/interior.aspx?content_id=2964430

Following up on Jon Parsons reporting of the easyJet debacle on Christmas Eve on the last blog post, BBC News Bristol carried the following “sad” story:

“Dozens of people hoping to enjoy Christmas in Madeira had to spend two nights in a hotel near Bristol Airport when their flight could not land.The easyJet plane took off on Christmas Eve as scheduled but after two hours in the air, passengers were told they would be returning to Bristol.Disappointed travellers were put up at the Holiday Inn. They were due to fly out to Madeira on Boxing Day afternoon. 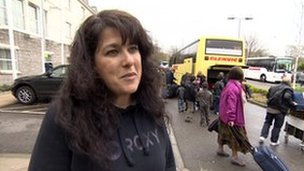 Passenger Katie Curtis, from Plymouth, who was visiting her mother in Madeira, said: "We had to come back and spend Christmas in the hotel.

"The children were really disappointed, they’re only nine and 10 years old. They were very upset on the way home on the plane.

"My Mum in Madeira managed to get a message to Santa so there are presents in Madeira for them and there were presents here for them, too. "The hotel has been great and we had a nice time here but it wasn’t the same as spending Christmas with our parents in Madeira."

Agostinho Mendonca, whose wife, daughters and grandchildren live in Madeira, said: "Everyone was planning to spend Christmas together in Madeira."It was nice here and everybody spent it like a family together but it’s not the same as being with our families back home.Some people had their families and children with them [at the hotel] but I was just by myself."

A spokesman for easyJet said: "The safety and welfare of our crew and passengers is easyJet’s top priority. We appreciate that many of those on-board may have been travelling with us to spend the festive period with loved ones."

TAP has postponed until March 1st the €7 surcharge on ticket sales for purchases by credit card. I thought this practise was being discouraged after being identified as a complete rip-off – at least TAP are late on the scene. Booking a Thomson flight the other day, I used my Banif “Multibanco” card which is clearly labelled as an “Electron” card – in order to avoid credit card surcharges – only to find that it was impossible to progress to payment because the on-line system was requesting the usual 3-digit CVC – which do not appear on Multibanco cards – has anybody found a way round this?

The Madeira Tourist Authority have announced that on 31 December, at 19.15, the bay of Funchal will host a concert of cruise ship whistles with the intention of creating a “special moment in the farewell of the year 2012”.