Apologies for this exclusively mosquito/dengue related post, but some cause for optimism opposed to the bad news over the late summer. In reading the articles reproduced below – sorry they are lengthy! – please bear in mind that as of today it has not been established which of the four possible strains of the Dengue virus have been present in Madeira for the first time over the last few months. What has been established is the the “haemorrhaging” strain of the virus is not present. Strangely if you catch one strain of the disease the you are thereafter immune to that same strain, but are more likely to react  badly to one of the other strains. Having said that the issue is fundamental to the future of Madeira’s tourist industry (just about it’s only industry) and the powers that be need to be as progressive and aggressive as possible in their efforts to at least minimise the potential risks.

Firstly – a dramatic reduction in the number of reported cases

As Peter kindly posted in comments on the last blog the number of cases has fallen dramatically to 18 in the last week, which, as a proportion of the resident population plus the additional numbers of tourists visiting the island, is a fraction of a percentage point.

Secondly – a vaccine just about scrapes through it’s first trial: 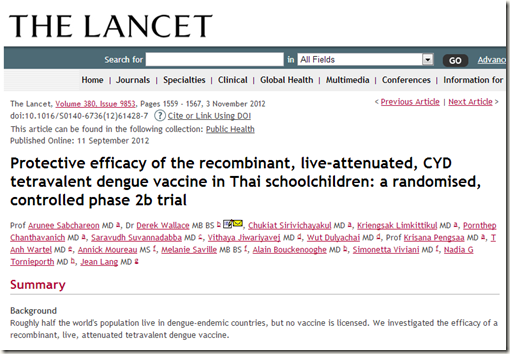 On a slightly disappointing note the New York Times has reported that Sanofi Pasteur, (the vaccine division of the French drug company Sanofi) the leading candidate to produce the world’s first vaccine against dengue fever was only 30 per cent effective in its first large clinical trial, dealing at least a temporary setback to efforts to control a disease that threatens half the world’s population.

Still, the study marked a milestone in the 70-year quest to develop such a vaccine, demonstrating that a safe and effective inoculation against dengue is feasible, researchers reported in a paper published online in The Lancet, the medical journal. The results are “the first ever demonstration that dengue vaccine is possible, and that’s huge,” said Dr. Nadia G. Tornieporth, an author of the paper and head of global clinical research and development at Sanofi Pasteur.

But in a commentary also published by The Lancet, Dr. Scott B. Halstead, a senior scientific adviser to the Dengue Vaccine Initiative, called the results “a complete surprise.”“We’re all disappointed,” Dr. Halstead said in an interview. “We built up an enormous expectation.”

A vaccine is considered crucial because there is no specific treatment for dengue, and no way to prevent the disease other than controlling the mosquitoes that transmit it. Infection by dengue virus can cause high fever and intense joint and muscle pain. Severe cases can involve bleeding and shock and can be fatal, particularly for children.

The World Health Organization estimates that 50 million to 100 million infections occur each year, mainly in tropical and subtropical countries. The incidence has increased sharply in the last few decades and the disease now affects more than 100 countries. In 2009, the Florida Keys had its first cases in decades.

Other efforts to develop a vaccine are under way but Sanofi Pasteur,, is several years ahead. While previous trials were meant to see if a dengue vaccine was safe or could spur an immune response, the Sanofi trial was the first to test whether a vaccine could actually prevent the disease.

Among children who got all three doses of either the vaccine or the control, there were 45 cases in the vaccinated group, representing 1.8 percent of that group, and 32 cases, or 2.6 percent, in the control group. The difference was not statistically significant. Using a different calculation the vaccine reduced the risk of getting dengue by 30 percent, well below the study’s goal of 70 percent.

The main problem was that there are four types of dengue virus and the vaccine failed to protect against one of them, known as serotype 2. It turned out that serotype 2 was the prevalent type in that region at the time of the study, accounting for more than half of the infections in the trial. That dragged down the overall results.

It is unclear why the vaccine did not protect against serotype 2, especially since the vaccine did spur an immune response to that serotype. But the trial showed that the vaccine was safe and could help dispel a theoretical concern that a vaccine could actually make the disease worse.

Dr. Tornieporth said the vaccine might be more effective in other regions where serotype 2 is not so prevalent. Sanofi is already testing the vaccine in large Phase 3 trials involving more than 30,000 people in 10 countries, with results expected in 2014.

Duane J. Gubler, a dengue expert at the Duke-NUS Graduate Medical School in Singapore, said a vaccine that protects against only three types of the virus could be sufficient to protect against severe disease. “The fact that it only protects against three of the four viruses doesn’t bother me at all,” he said.

The trial was too small to show whether that was true, since there were only five cases of severe disease — three in the vaccinated group and two in the control group.

Dr. Robert Edelman, a dengue expert at the University of Maryland, called the results “a bit disappointing.” The results are likely to lead to a delay in the use of the vaccine, according to both Dr. Tornieporth of Sanofi and to Dr. Halstead of the Dengue Vaccine Initiative, which is financed by the Bill and Melinda Gates Foundation.

Given the urgent need, they said, some governments had been considering approving the vaccine based on the results of the Thai trial, even though it was only a Phase 2, or midstage trial. Now the countries are more likely to wait for the Phase 3 results.

The dengue vaccine, which is made of live, attenuated viruses, is one of the most important products in Sanofi’s pipeline, with some analysts expecting sales to exceed $1 billion a year. Sanofi has spent 350 million euros, or about $450 million, to build a new factory in France to make the product

I have been researching on-line for what seems like ages for any news on what I understood could be the solution to the “mosquito problem” – releasing genetically infected mosquitos into the native population. Finally something turned up in the Mail Online (read the surprising statistic here – with all of that water Key West has had only 93 cases!):

Hundreds of thousands of genetically modified mosquitoes are awaiting federal approval for release into the Florida Keys as part of an experiment aimed at reducing the risk of dengue fever.

Mosquito control officials have requested the Food and Drug Administration’s sign off on the experiment that would be the first of its kind in the U.S.

Some residents of the tourist town of Key West worry though on how much research has been done to determine the risks of releasing genetically modified mosquitoes on the Keys’ fragile ecosystem.

Let us go! An entomological technician with the Florida Keys Mosquito Control District, sorts and counts dead mosquitoes in Key West, where officials are hoping to release genetically modified mosquitoes into the wild

Officials are targeting the Aedes aegypti mosquitoes because they can spread dengue fever, a disease health officials thought had been eradicated in the U.S. until 93 cases originated in the Keys in 2009 and 2010.

The trial planned by mosquito control officials and the British company Oxitec would release non-biting male mosquitoes that have been genetically modified to pass along a birth defect that kill their progeny before reaching maturity.

The idea is that they will mate with wild females and their children will die before reproducing. After a few generations, Key West’s Aedes aegypti population would die off, reducing the dengue fever risk without using pesticides and at relatively a low cost, the proponents say. There is no vaccine for dengue fever. Genetic adaptions: An Aedes aegypti mosquito is seen feeding on a woman’s arm while the ones genetically modified would be non-biting males that pass along a birth defect killing their progeny before reaching maturity

The district’s website says the modified genes will disappear from the environment after the mosquitoes carrying it die, resulting in no permanent change to the wild mosquito population. The district also says that the mosquito species isn’t native to the Keys, nor is it an integral food source for other animals.

Only female mosquitoes bite, so the modified genetic material wouldn’t be passed on to humans, Mosquito control and Oxitec officials said. They also say they’re being transparent about their data and the trial.

Phil Lounibos of the Florida Medical Entomology Laboratory also said it would take repeated releases of modified mosquitoes for the program to work, and the public outcry against genetically modified organisms, even when it’s irrational, may be insurmountable.

‘The public resistance and the need to reach some agreement between mosquito control and the public, I see that as a very significant issue, outside of the (operating) costs, since this is not just a one-time thing,’ Lounibos said.

The Aedes aegypti has shown resistance to pesticides used to control other species, and is the most difficult for the district to manage. Common in the Southeast and the Caribbean, it lurks in standing water around homes and businesses and can breed in containers as small as bottle caps.

In the trial, thousands of male mosquitoes bred by Oxitec would be released in a handful of Key West blocks where the Aedes aegypti is known to breed; the number of mosquitoes in those neighborhoods would be measured against the numbers from similar blocks where no modified mosquitoes were released.

There hasn’t been a case of dengue fever in Key West since November 2010, but two other cases were reported elsewhere in South Florida this fall.