A Lignum, Investimento Turísticos da Madeira, do not know if they can continue with the works of Madeira Palácio, one of the original 5-Star hotels on the island, where I was lucky enough to stay on my first visit to the island in 1990. Unfortunately it looks like it will now stay as a half demolished eyesore for some time. The business group that wanted to build the hotel and a ‘beach club’ say they have been caught in an “unfavorable situation”. They have just completed the construction of an adjacent luxury resort with 112 apartments, intended to be integrated in the project, which is expected “to enter the market soon, but that will not generate any profit for the company, since the amounts collected will be channelled to totally bring down the bank debt”.

Miguel Santana, director general of Lignum explained to the Diario “at this time, the hotel is not a reality due date, nor is there the possibility of projecting the evolution of the unit in the coming years”.

The graphic above shows the planned conclusion of the current progress opposite (photo courtesy of jornaldamadeira.pt)

The Diario reports that the preliminary data of the 2011 Census shows  the resident population in the region increasing in the last decade, from a total of 245,011 in 2001 to 267,785 last year. Madeira was in fact the second region in Portugal that grew the most in the last 10 years (9%). On the whole national population growth between 2001 and 2011 was only 2%.

The pace with population growth, widened the gap between young and old. However, the autonomous regions of the Azores and Madeira are still those who hold the highest percentage of young people (18 and 16% respectively) and less representative of the elderly (13 and 15% respectively).

Brilliant new offering from a team of Software Engineers at the University of Madeira who, to quote their website, “love hiking, especially on Madeira Island. We combine our strengths to enhance our skills and create useful, different and engaging solutions”.

They are based in a room named after Steve Jobs at Madeira Tecnopolo which was the result of a partnership between the CEIM (Business and Innovation Centre of Madeira) and the University of Madeira.

The application is available for Android and iPhone (in Portuguese, English and Spanish) and is currently in first place in the ranking of the official Android store for queries related to Madeira, Levada, etc, with about 2000 downloads. Screenshot of their home page below: 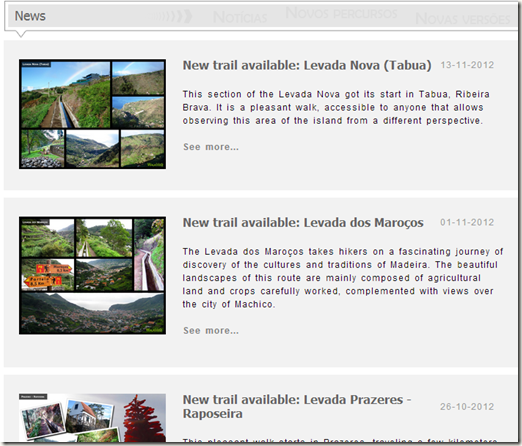 ✓ distance, difficulty, duration and altitude of the route

✓ Description and pictures of the route for local walkers

✓ Points of interest along the way

✓ Directions to get to the route by car, public transport or guides

✓ Sharing of courses in social networks

✓ All routes are stored in the phone. It is not necessary data network (except to view photos)

“At some point we feel the need to have a place where all related information was centralized. But above all, we need something that can be with us in our adventures and at the same time, allow us to share experience with other hikers. And they with us!
We want WalkMe to be something innovative that encourage and guide more and more people in discovering Madeira Island natural wonders”

In a reflection of difficult economic times, the company that serves urban public transport in Madeira, Horários do Funchal, lost 9.1% of passengers in the first nine months of this year, according to data released today by the Regional Directorate of Statistics of Madeira (DRE).

According to the data from January to September, the company carried 16.8 million passengers.

According to data from the DRE, Madeira also recorded a fall of 8.2% in landings observed in Funchal Airport and 8.3% in take-offs. Already the Porto Santo Airport fell by 3.9% in landings and take-offs of 3.6%.

In the first nine months of the year the Madeira Airport has lost 18% of cargo discharged, curiously noting an increase of the same size in the cargo loaded. In Porto Santo movement of cargo fell 11%.