The Mail yesterday reported that “for the paltry sum of just £10million Kuwait earned a place in the Guinness Book of Records last night as it celebrated the golden jubilee anniversary of its constitution in style by laying on  the biggest fireworks display of all time.

A dazzling array of colours illuminated the skies above the country’s capital of Kuwait City as a staggering 77,282 fireworks were launched over the period of an hour.

A representative of Guinness World Records announced the achievement on Kuwait television at the end of the display which had been watched by tens of thousands of Kuwaitis and expatriates on the Arabian Gulf Road by the sea. I’m not sure that the budget here in Madeira for this and subsequent New Years will be quite as generous, so a chance at regaining the record could be some way off. Nevertheless Kuwait cannot match the natural amphitheatre that is the bay of Funchal, which adds enormously to the impact of those few minutes after midnight – I think I would be getting bored after an hour!

Demonstration scheduled for today outside the German consulate in Funchal

The Union of Trade Unions of Madeira (USE) is protesting today (Monday) against the presence of the German Chancellor in Portugal. The action is scheduled for 17 hours next to the German consulate in Funchal, the Largo do Phelps.

"Mrs. Merkel is doing what Germany many years ago could not by force of arms," ​​said the leader of the USE, Alvaro Silva. "They are now doing it through the economy, ie the “garrotted” countries of Portugal, Greece, Spain and Italy, and we’ll say no," he continued.

The occurrence of new landslides in the early hours of Saturday affected recovery work that  has been carried out in various localities of the municipality of Santana since Tuesday – in the aftermath of bad weather that left clearly visible marks in the northern county.

The Diario reports that despite major problems most roads are now passable, with work divided between resetting channels of water lines that overflowed and clearance of various agricultural roads that continue to impede road access to areas important for cultivation and cattle. The parishes of Vale da Lapa, da Ribeira Grande e da Tranquada, were most affected.

New road layout at the junction of João Gomes and Santa Luzia “rivers”: 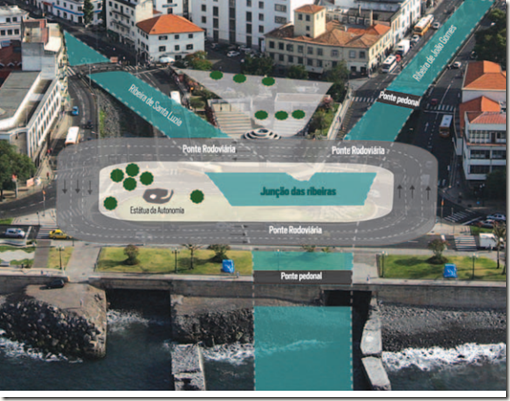