The most recent figures are reported in the Diario today: 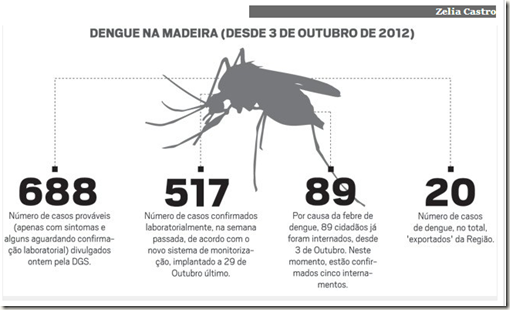 “Since October 3, 1,357 cases of dengue fever have cumulatively been reported in the Region, of which 669 were laboratory confirmed and 688 are probable (only with symptoms, some awaiting laboratory confirmation). These numbers are part of the weekly update released yesterday by the Directorate General of Health

“In a statement signed by the Director-General of Health, Francis George, the DGS also notes that there have been 89 hospitalizations in Madeira because of dengue fever and, at this moment in time, just five are hospitalised. So far no deaths are recorded.

“Regarding dengue cases (accumulated data) in people who have recently stayed in Madeira, nine cases across the continent has been diagnosed ,all benign. The total is twenty cases “exported” from the region so far. This number has not increased since last week.

Casa Parsons (thank you Debs) has kindly let me know that the UK Health Protection Agency have updated their figures (these, in the light of the above, are now slightly out of date – but they are consistent with the previous figures from the DGS in Madeira)

This link includes the usual advice to travellers – who, we must emphasise again, must not be discouraged from visiting Madeira, as the Dengue strain is very mild. They re-iterate very sensible (and easy to implement) precautions that can reduce the risk to minimal now that the weather is cooling.

See also the Telegraph article at the bottom of this post

The Diario reports that fishing in Madeira, in first nine months of the year, earned a record 10.6 million euros for fishermen, representing an increase of 15.9% over the same period last year.

According to data from the Regional Directorate of Statistics of Madeira, this rise is due to an extraordinary harvest of tuna, with 2805 tonnes sold at auction in Madeira – more than double (114% more) than the first nine months of last year. Tuna assured the fishermen and their owners an income of 5.1 million euros, 59.9% more than in the same period last year.

Revenues generated from the most valuable species  in the seas around Madeira – catches of black scabbard fish – have declined due to only 1368 tons being unloaded – 15.2% less than the year before – worth 4 million euros, representing a decrease of 12.4% of the income of those fishermen.

A decline is, however, affecting the production and consumption of other types of meats. In the first nine months 1,234 tons of beef was supplied, 30.6% fewer than in the same period of 2011. For the first time in recent years, pork recorded a decline of 50.6%, with the local market selling only 341 tons produced in the region.

Secretary of the Treasury, Maria Luís Albuquerque, said today that "the privatization of ANA also involved the airport of Madeira, and it remains to determine whether the Government will remain in the company”.

Maria Luís Albuquerque, who spoke at the briefing of the Council of Ministers, following approval of the list of five consortia remain in the race for the privatization of ANA, said that the discussion with the Regional Government of Madeira is not yet closed.

The discussion "is still on-going, but the overall management of the airport of Madeira, as ANA holds the majority stake in ANAM (Madeira Airports), will be included in the privatization process," said Secretary of State.

The Council of Ministers today approved the ‘short list’ of five candidates for privatization and that consortia include Fraport / MFIs, Vinci, Zurich, Blink and EAMA, the last two with the participation of national companies.

The deadline for submission of tenders binding, which will be in mid-December, will be fixed by order of the Minister of Finance.

Travel advice from the Telegraph 16 Nov: 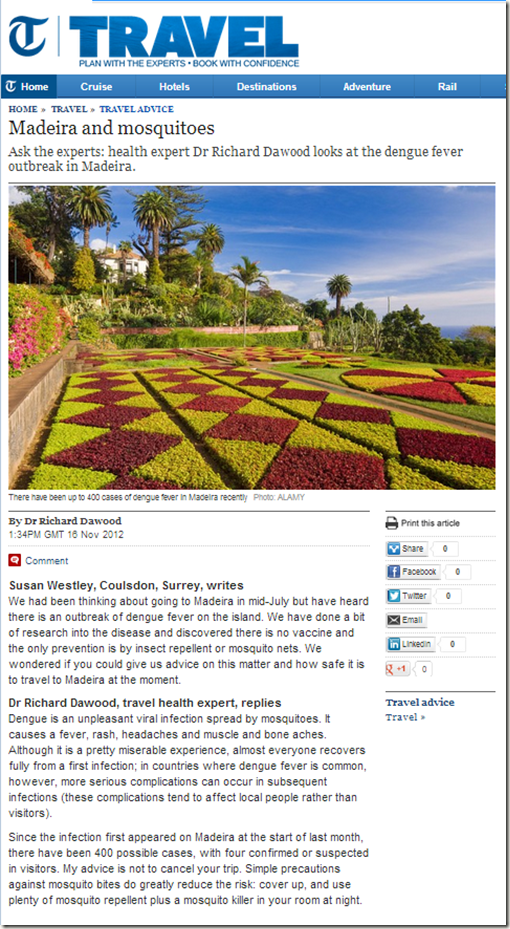